Institutionalists would abandon gold in favor of Bitcoin

The past week has seen Bitcoin’s price regain its splendor, and once again rise above the closely watched threshold of $ 50,000. And this jump of more than 35% is due to several factors, according to the financial institution JPMorgan. As Markets Insider reports, this bitcoin rush is believed to be largely due to institutional investors, who seek to hedge against inflation.

The reason is that gold has not shown particularly enthusiastic performances for two years, even as the Covid-19 crisis rocked economies and inflation began to rise. Conversely, Bitcoin’s price showed strong performance over the same period, which caught the attention of institutions, according to JPMorgan:

” [Ils] seem to be returning to Bitcoin, as they perhaps see it as a better hedge against inflation than gold. “

Other Factors That Facilitated This Bitcoin Rush

JPMorgan also notes two other factors that would have made institutions trust Bitcoin. The report notes that several senior American officials, including the chairman of the Federal Reserve, have said in recent days that the United States has no intention of banning cryptocurrencies, unlike China.

In addition, JPMorgan notes the growing adoption of the Lightning Network scalability solution, which allows Bitcoin to remain competitive in terms of transaction speed and fees. This is notably driven by El Salvador, which recently made BTC legal tender, and whose state wallet, Chivo, relies on the Lightning Network.

👉 On the same subject – Bitcoin (BTC): Salvadorans deposit more money than they withdraw on the Chivo Wallet

Bitcoin dominance on the rise

The result of this bitcoin rush is that its dominance, i.e. the market share it occupies against altcoins, has risen to 45%. According to JPMorgan, this isn’t necessarily a bad sign:

Bitcoin’s price has surpassed $ 55,700 in the past few days, a threshold it hasn’t hit since last April. It has since fallen below this level, and is exchanged this morning for $ 54,100: 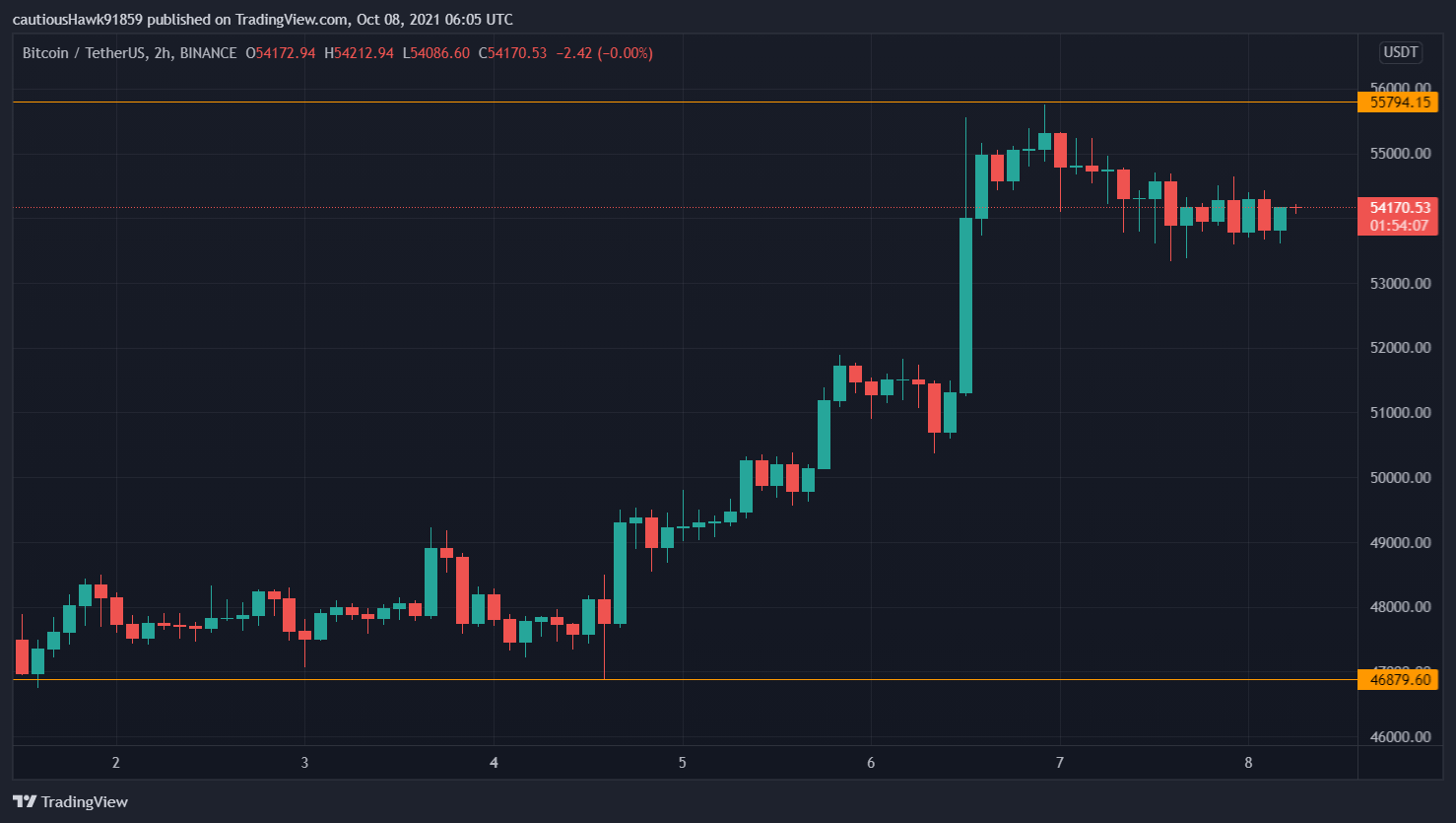 Its capitalization still exceeds the symbolic threshold of 1,000 billion dollars, and its progression over the week shows + 23%.

Altcoins are also globally celebrating, with Ether (ETH) which increased by + 19% over the week, and BNB which took + 13%. The other biggest progression of the top 10, however, remains Dogecoin (DOGE): it has increased by + 20% over the last seven days.