During AMC Entertainment’s second quarter earnings conference call, CEO Adam Aron revealed that the company is preparing to accept Bitcoin (BTC) in the near future.

American moviegoers will therefore be able by the end of the year to obtain tickets in exchange for cryptocurrency, and specifically with BTC at first. With 590 theaters in the United States and 360 internationally, AMC Entertainment is by far the largest movie theater chain in the world.

In addition to the future acceptance of Bitcoin, the company is studying “other options with the blockchain”, which suggests that it is certainly preparing to enter the world of non-fungible tokens (NFTs).

AMC has not yet specified which solution would be used to process crypto-asset payments. In addition, the company will also start accepting payments via Apple Pay and Google Pay by the end of 2021, two solutions now interconnected with crypto-assets, notably thanks to Coinbase and its crypto-card.

“We are also in the early stages of exploring how AMC could take part in this burgeoning new world of cryptocurrency. […] We’re quite intrigued by the potentially lucrative business opportunities for AMC if we smartly continue our serious commitment to cryptocurrency, ”said Adam Aron.

This initiative is a real rapprochement between two fairly volatile assets, namely Bitcoin on the one hand, and AMC stock on the other, which has become one of the most popular stocks for retail investors in recent months. , since it was featured on Reddit’s WallStreetBets forum. 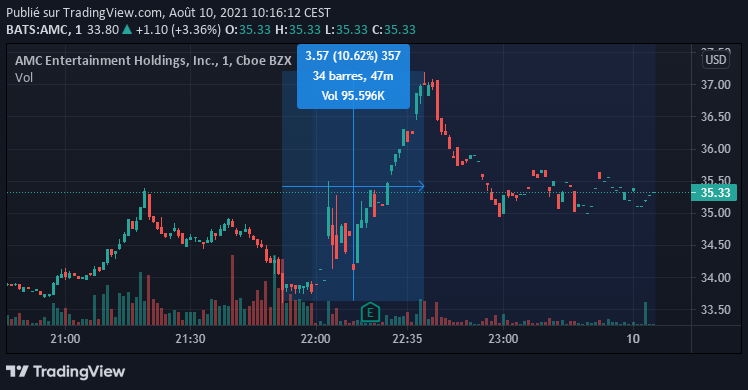 For several months, not a week has gone by without a major company adopting cryptocurrencies. With Wellbots, Sheetz, Quizno, Exit, Palantir or even Time Magazine, the list continues to grow, and the United States seems to be the most advanced on this point.

👉 On the same topic – Amazon continues to explore cryptocurrency payments