Beginning November on the hats of wheel by forming a new high of 68,426 dollars, the price of Bitcoin (BTC) is freed from its old ATH, marking a weekly low of 60,144 dollars. 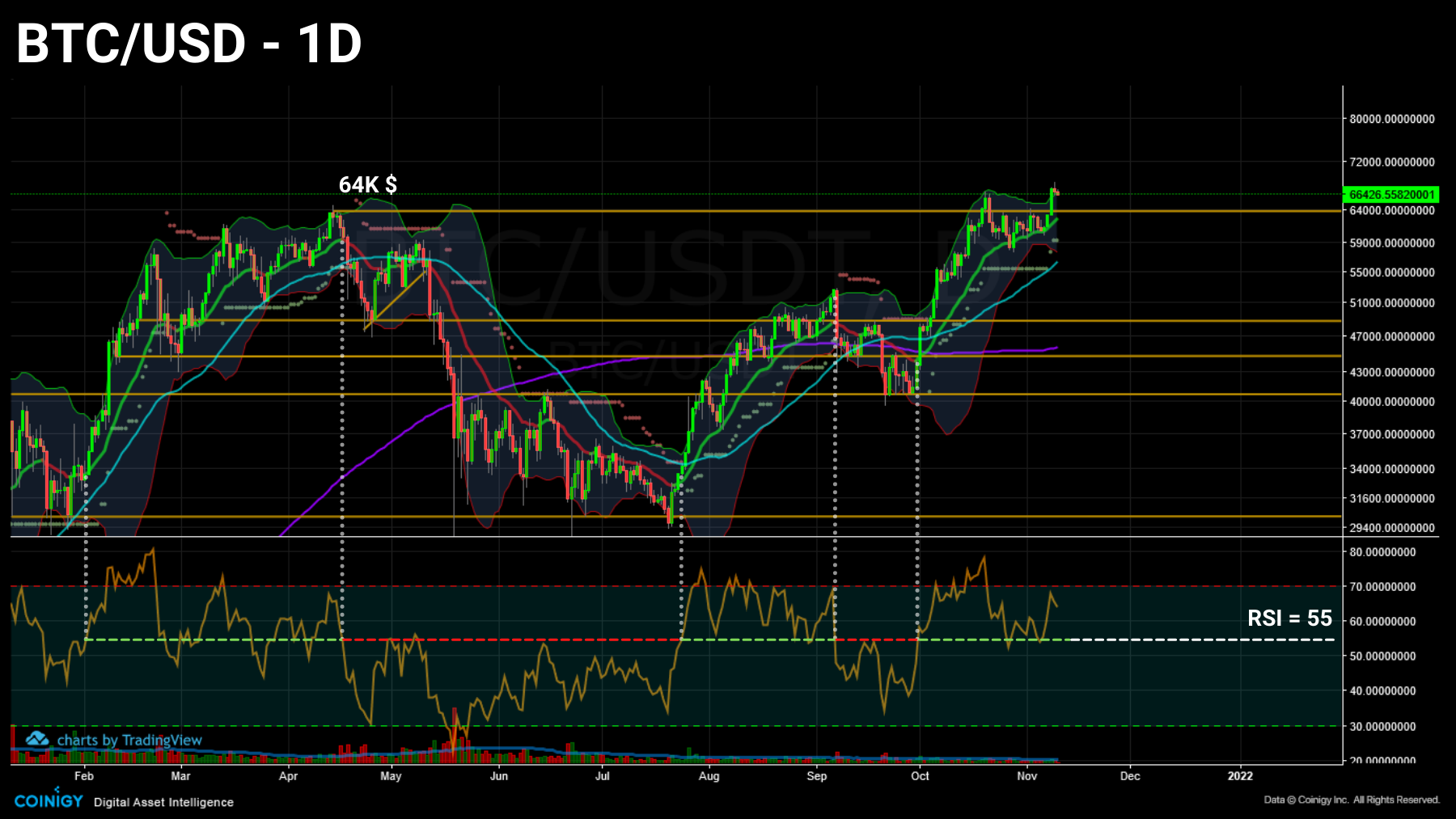 Many waited for this moment, hoping that this new rising leg would bring its share of thrills and profits.

This week, the price of BTC sits above 98% of its realized volume. In other words, only a few tokens have been traded at such high prices in the past, facilitating its ascent as very little trading volume can serve as resistance at this time. 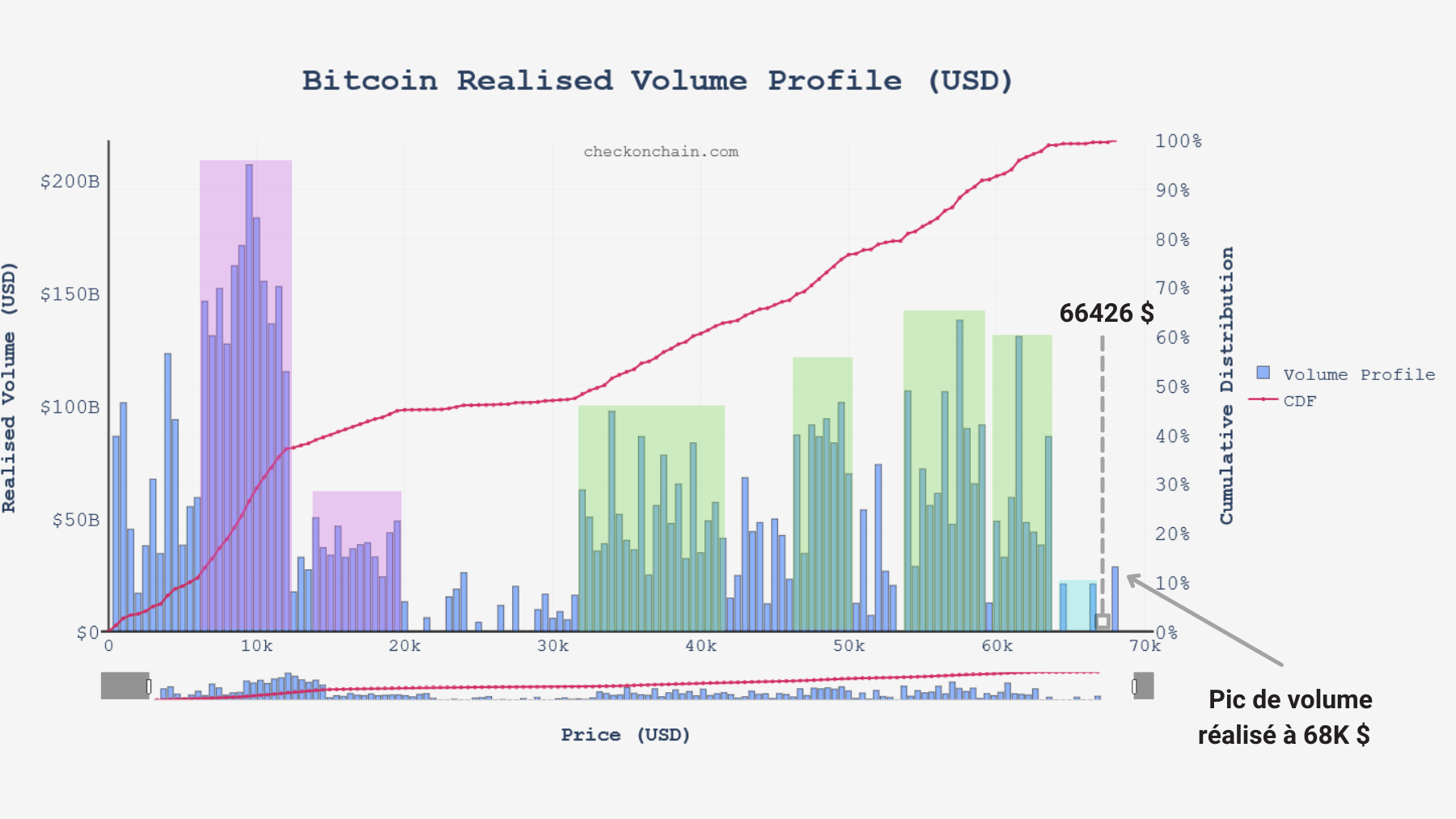 However, on closer inspection, it appears that the current market structure is deviating from what previous cycles have offered us.

To support this thesis, let’s turn to the past to understand history:

the on-chain activity of the Bitcoin network; the commitment of participants; market supply and demand dynamics.

The network is gradually waking up

Following an expansion phase during its early years, the Bitcoin network reached a capacity of 350,000 daily transactions at the end of the 2017 bull market.

While one would have thought that there was a strong upturn in the number of transactions at the beginnings of the present bull market, activity has continued to grow moderately since 2017.

However, after spending several months on a sub-diet, on-chain activity seems to be showing reassuring signs of life. 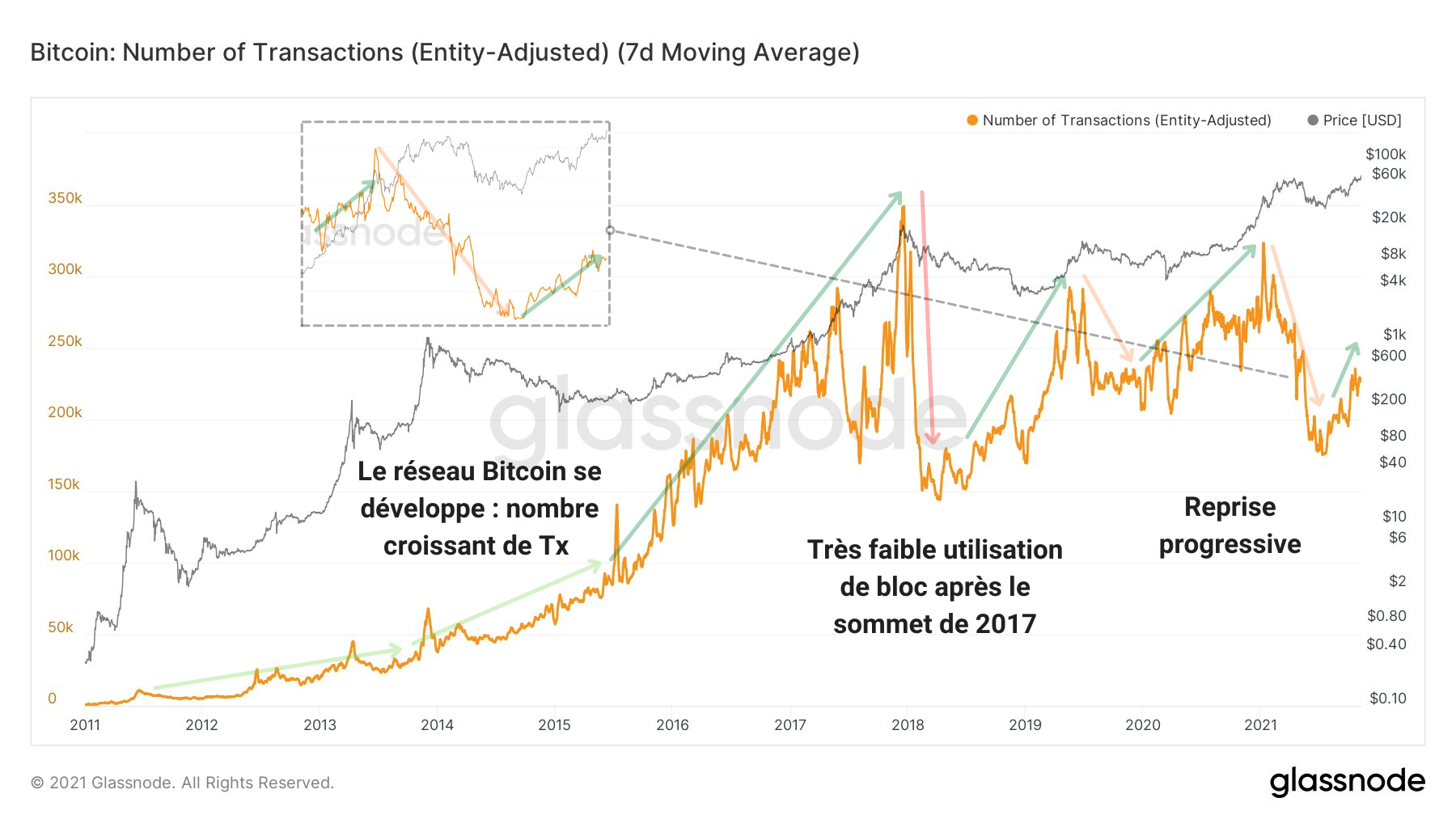 Graph of the Number of Transactions on Bitcoin (BTC) – Source: Glassnode

On a weekly basis, the number of transactions made on the Bitcoin blockchain has been steadily increasing since BTC broke free from the $ 30,000 support, to print a value of around 230,000 daily transactions recently.

This observation is supported by the explosion in transfer volume in early October, printing a historic value of more than $ 17.5 billion traded in one day. 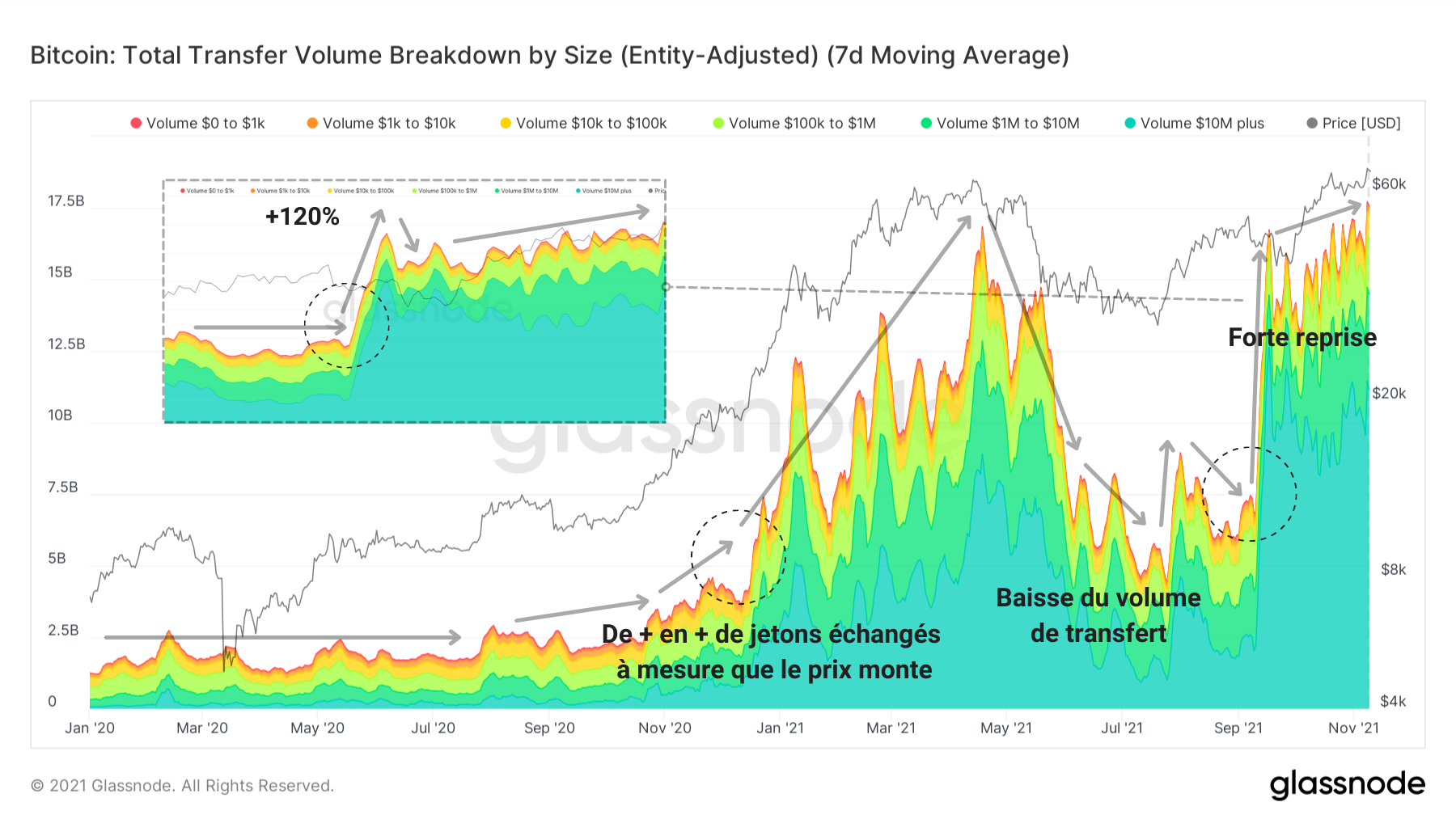 This resumption of on-chain activity was expected by many analysts, who see it as an essential sign of vitality for Bitcoin as a distributed network.

Put simply: Transactions are growing tentatively, but on average are transferring more BTC than in the past.

👉 Find our lexicon of on-chain analysis

To go further, let’s study the evolution of the number of entities on the network as well as their commitment.

Note that on the Bitcoin network, an entity is different from an address. In reality, an entity often controls multiple addresses and multiple entities may even control one or more common address (es).

After a record increase in the number of active entities since March 2020, many of them calmed down days before BTC hit $ 64,000.

However, we can observe a slight rebound in the activity of the entities present on the network.

Whether investing, speculating or transferring funds, the fact that participant engagement increases after a sharp decline is a positive sign. 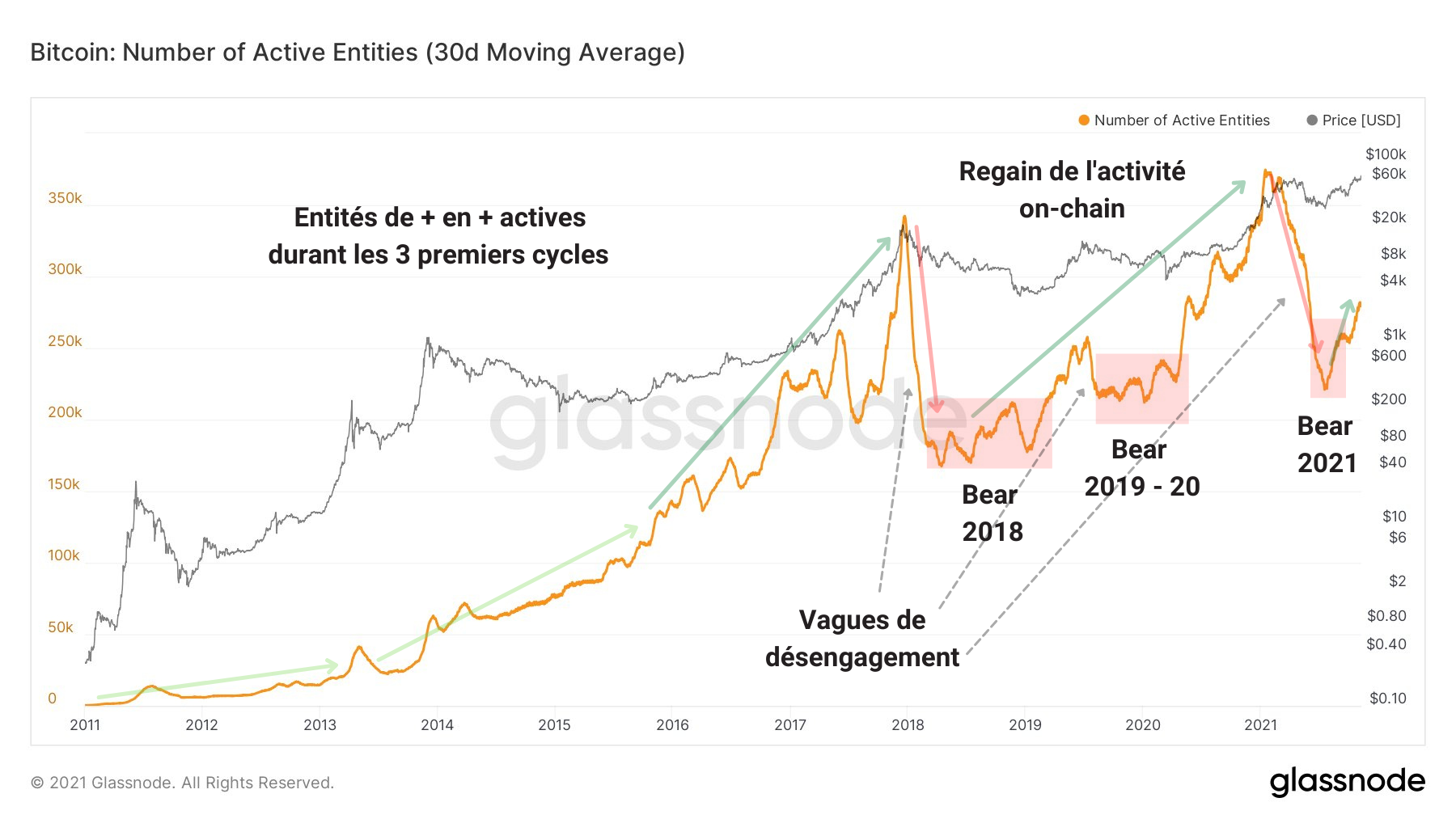 Since the value of a network comes partly from its use, the higher the activity of the participants, the greater the effective value of the network.

Ideally, I would like to see this indicator recover and then surpass the level set in March 2021 as the price of BTC appreciates higher.

To follow, the net growth of entities gives us a glimpse of the rate at which new individuals are entering the market (and therefore the network).

Below, we can clearly see that the growth rate has just rejected the level of 5,000 new daily entities.

This base, formed after the 2017 summit, signals for the second time a strong disappearance of entities, exhausted by the capitulation of the market. 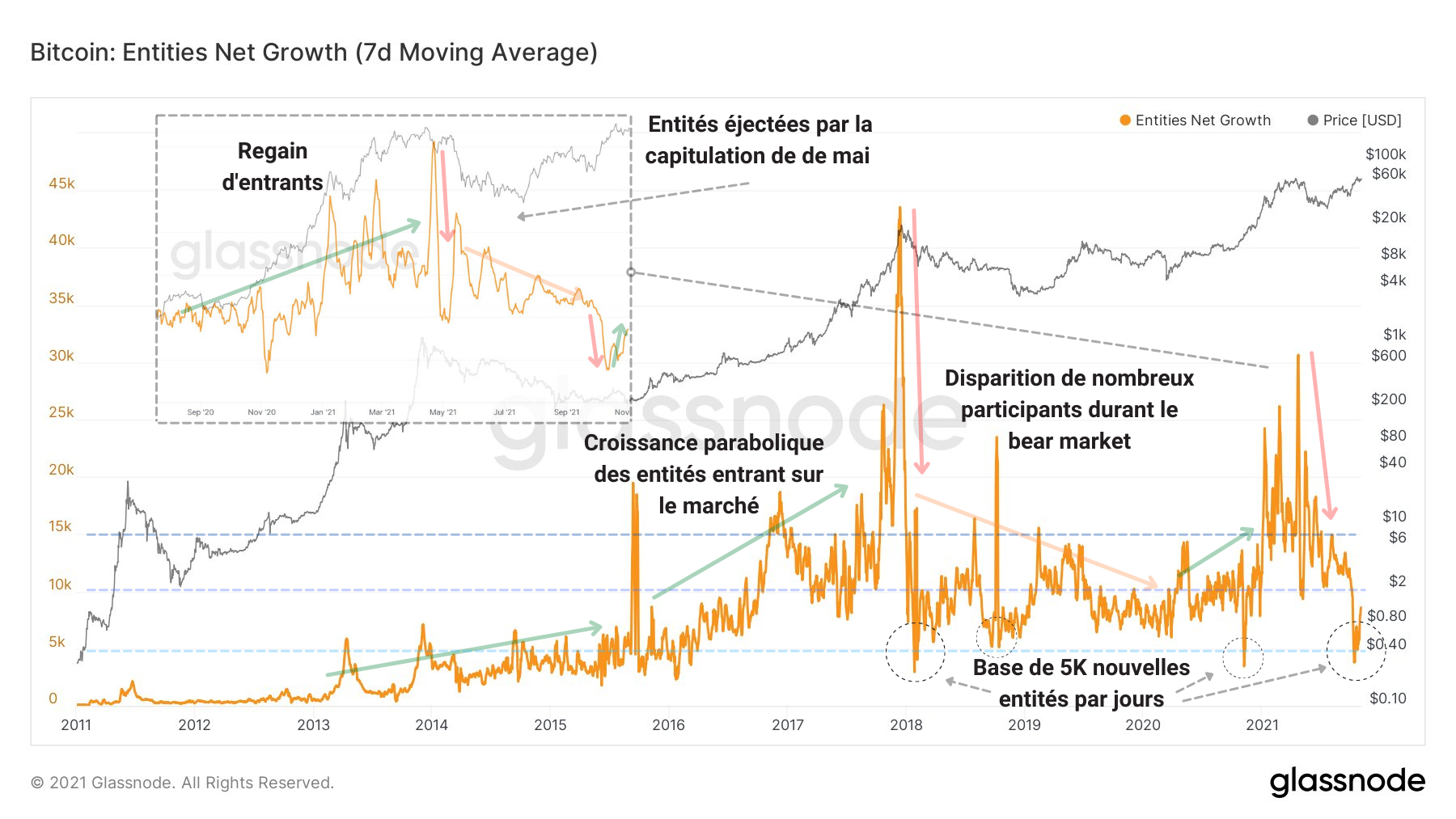 Curiously, the number of participants ejected voluntarily (panic sell / abandon) or not (liquidation) during the recent correction has not yet been met by the arrival of new entrants.

All of these observations highlight a salient fact: Bitcoin, maturing as a network and as an asset, behaves in a new way.

The structure of this bull market differs from previous cycles in various aspects and a breaking point in on-chain activity and entity engagement was reached with the bursting of the 2017 bubble.

To confirm this thesis, let us observe the market from a third angle: that of supply and demand.

During its childhood, Bitcoin was mostly transferred from the wallets of miners to the reserves of exchanges.

This long deposit phase, disrupted for the first time in 2016, was the dominant trend in the flow of tokens in circulation. 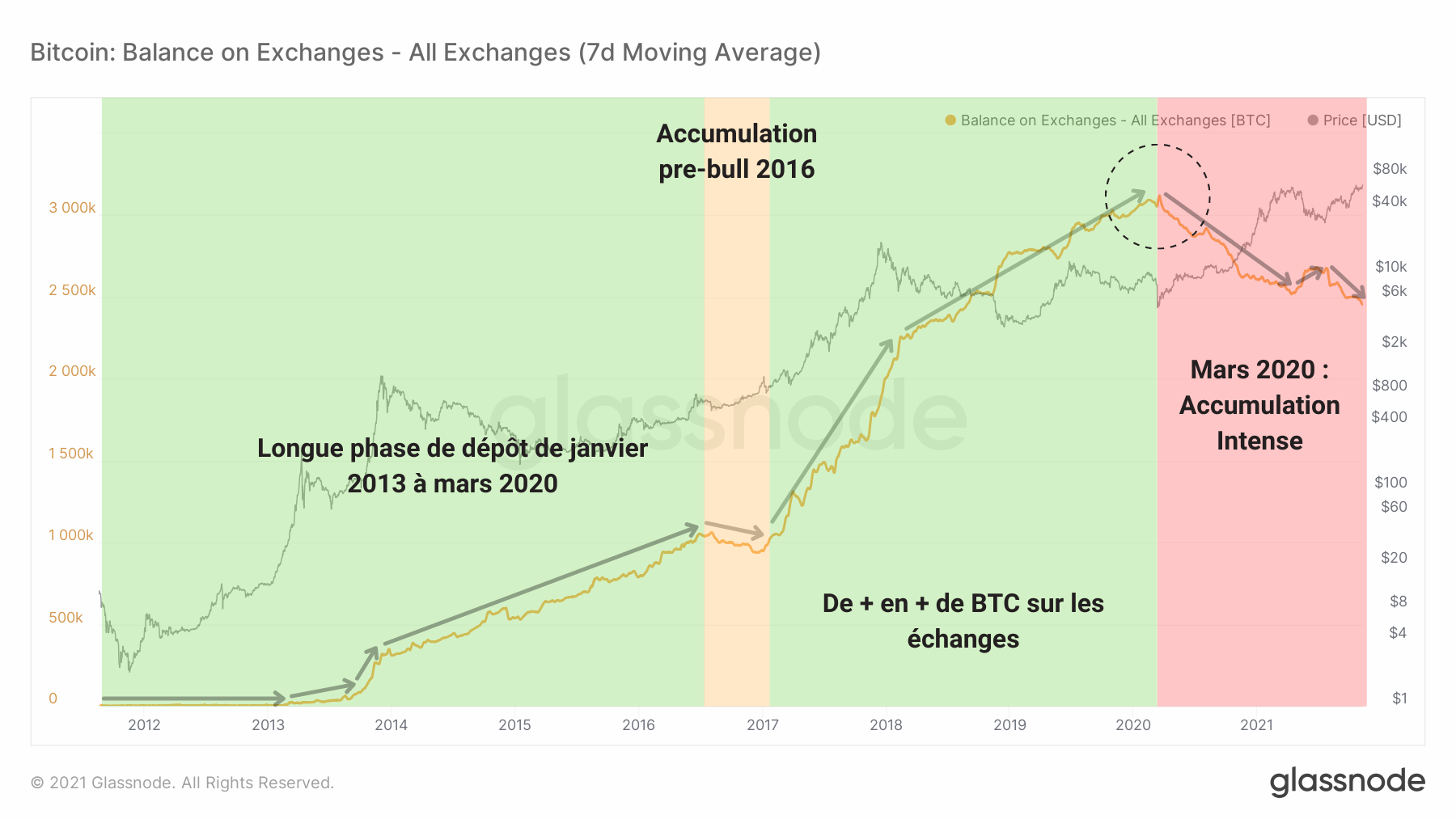 In March 2020, a turnaround was initiated: the BTC reserves of Coinbase, Binance, Kraken and others began to drop drastically to today only hold 13.2% of the total supply in circulation.

These trends can be clearly seen through the net change in positions of these platforms, in order to identify a change in the behavior of participants.

On a monthly basis, a majority of incoming flows fill the coffers of the platforms from March 2013 to March 2020.

Seven almost uninterrupted years in which more and more BTC is available and constitutes a large part of the liquid supply. 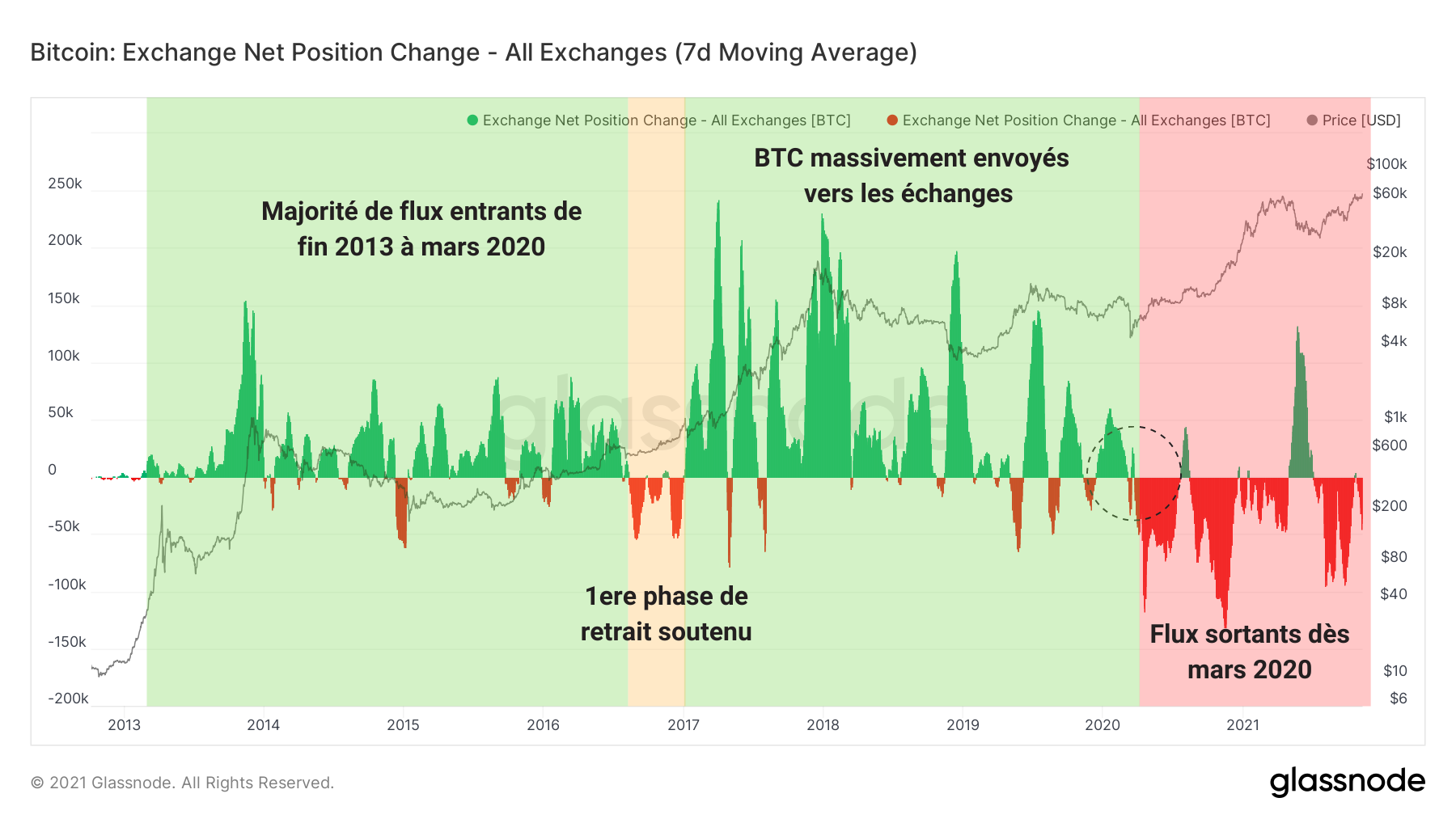 However, a period of powerful outflows has started since March 2020 and every day an increasing number of tokens are withdrawn from exchanges and stored by holders over the long term.

Global HODLing behavior has set in since the $ 10,000 level and the accumulation does not appear to be weakening.

While Bitcoin became a liquid asset during its early years by being heavily deposited on exchanges, it matures over time and is viewed as a store of value by more and more investors.

It is this paradigm shift, resulting from an evolution in investor psychology, that influences the dynamics of supply and demand. 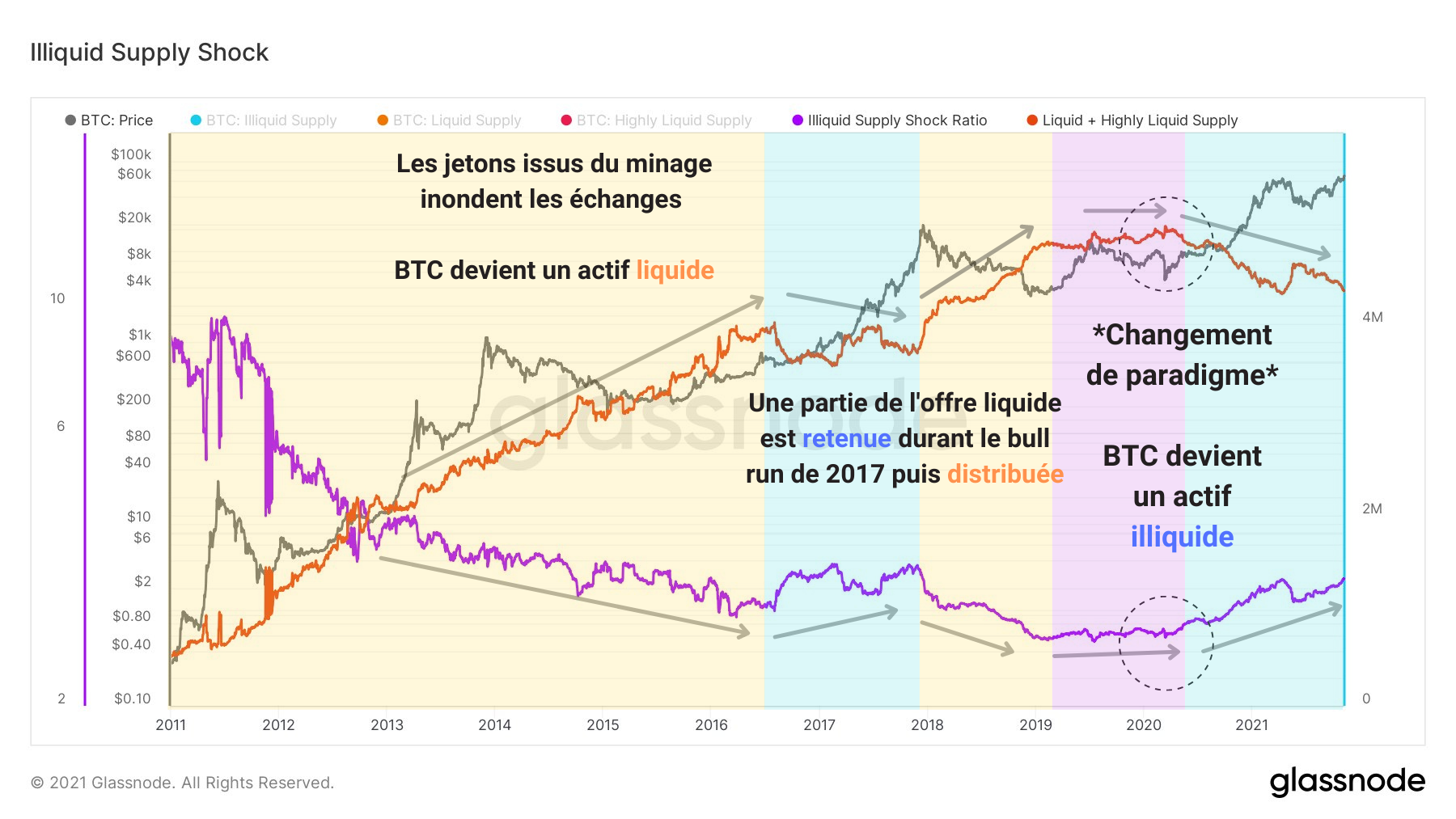 Many entities, public or private, powerful or small, now consider Bitcoin as a monetary asset in its own right and try to accumulate it for the future.

A generational transfer is underway. From miners to exchanges, then exchanges to long-term holders as early as March 2020, BTC tokens are becoming illiquid at an increasing rate.

The emergence of this hitherto unprecedented dynamic confirms that this market is structurally different. Never in the history of Bitcoin has such an accumulation happened.

Finally, despite these differences with past cycles, the market structure is still bullish.

Based on our observations, we can now state the following:

on-chain activity is still progressing timidly; many participants go missing after the May surrender; a paradigm shift makes BTC an illiquid asset.

What to know about affiliate links. This page presents assets, products or services relating to investments. Some links in this article are affiliate. This means that if you buy a product or register on a site from this article, our partner pays us a commission. This allows us to continue to offer you original and useful content. There is no impact on you and you can even get a bonus using our links.

Investments in cryptocurrencies are risky. Cryptoast is not responsible for the quality of the products or services presented on this page and cannot be held responsible, directly or indirectly, for any damage or loss caused as a result of the use of a good or service highlighted in this article. Investments related to crypto-assets are risky by nature, readers should do their own research before taking any action and invest only within the limits of their financial capacity. This article does not constitute investment advice.

About the Author: Prof. Chain

My goal is to inform everyone of the state of Bitcoin (as an asset and a distributed network) through the prism of on-chain analysis.
All articles by Prof. Chain.

Floods in Turkey: the toll is growing