BlackBerry 5G smartphone concept shows an updated version of the legendary BlackBerry Passport from 2014. Water resistant and equipped with a dual camera.

The last BlackBerry was introduced in mid-2018, the Key 2. Meanwhile, the company has gone through major changes. The Chinese TCL no longer holds the license rights to manufacture BlackBerry smartphones. Since August 2020, the Canadian brand has been part of the American OnwardMobility. During the announcement, the company also expressed its intention to launch the first BlackBerry 5G Android smartphone with a physical keyboard in 2021.

To date, nothing has been officially announced about the design and model name. That inspired graphic designer Ts Designer to design a BlackBerry Passport 2 5G smartphone for LetsGoDigital. The concept design has the same iconic design as the Passport from 2014. This mobile phone was equipped with a physical keyboard and a characteristic square screen, with a screen diagonal of 4.5”. 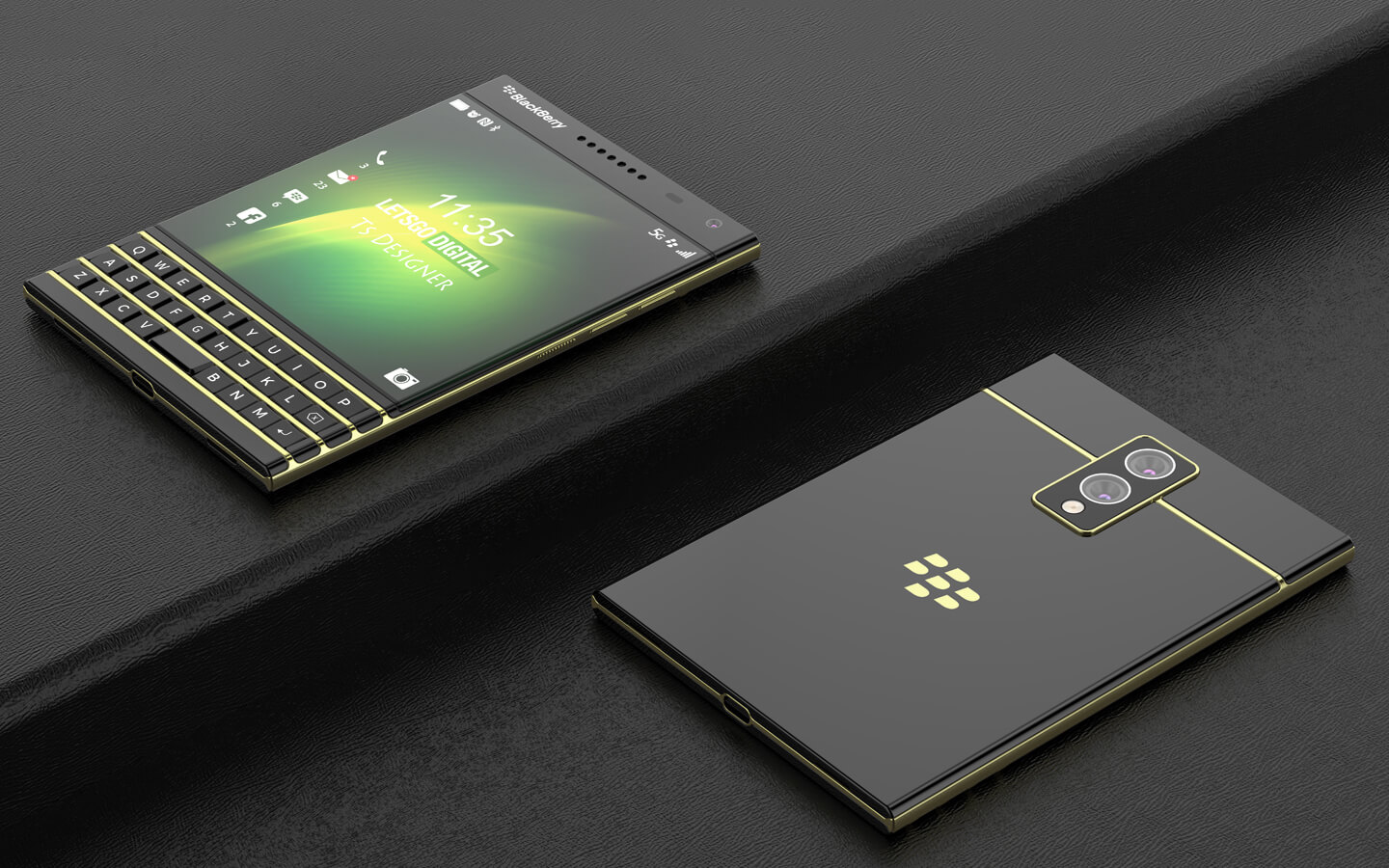 The original Passport had a single front and rear camera. With the front camera you could only take 2 megapixel photos, the rear camera was equipped with a 13 megapixel image sensor.

Earlier this year, OnwardMobility announced in an exclusive interview with NikkeiAsia that it would integrate a top-of-the-line camera into the new BlackBerry 5G 2021. A striking statement, given that the camera has never been a spearhead for the corporate BlackBerry. smart phones.

With its BlackBerry Passport 2 concept, Ts Designer has chosen to provide the rear with a dual camera with a wide angle and an ultra wide angle lens. The flash is placed below the camera system, rather than above it – as was the case with the original.

The front has also been modernized, especially the top bezel has been reduced, making the device slightly shorter. The unique square display and keyboard have been retained, as can be seen in the YouTube video below.

Furthermore, Ts Designer’s concept is based on the assumption that it will be a water-resistant device, so that it can be used in varying environments. The BlackBerry Motion from 2017 is so far the only mobile phone of the brand that was marketed with an IP67 rating.

There are still many question marks about the BlackBerry smartphone in development. The story began in mid-2020 when OnwardMobility issued a press release stating that the new device would be released in North America and Europe in the first half of 2021.

It also became clear from this coverage that the new BlackBerry will run on the Android OS – as has been the case with all BlackBerry phones since the introduction of the Priv in 2015. However, it is not yet clear whether the new model will run on Android 11 or a other version will run.

Furthermore, OnwardMobility has indicated that it will provide the mobile device with 5G support. Although all renowned smartphone manufacturers have now released several 5G models, it will be the very first BlackBerry 5G phone. This will make the new device significantly more future-proof.

Another detail disclosed in the press release; a physical keyboard will be integrated. Of course, this led to the joy of many fans, after all, this has always been an important feature of many previous models. However, it remains unknown how the keyboard will be integrated. It may be a fixed-keyboard – as we see in the concept design of Ts Designer. However, it could also be a slide keyboard, as we know from the aforementioned BlackBerry Priv.

The press release sounded promising, but afterwards it remained anxiously silent and the first half of 2021 has now passed. Yet there is still hope. 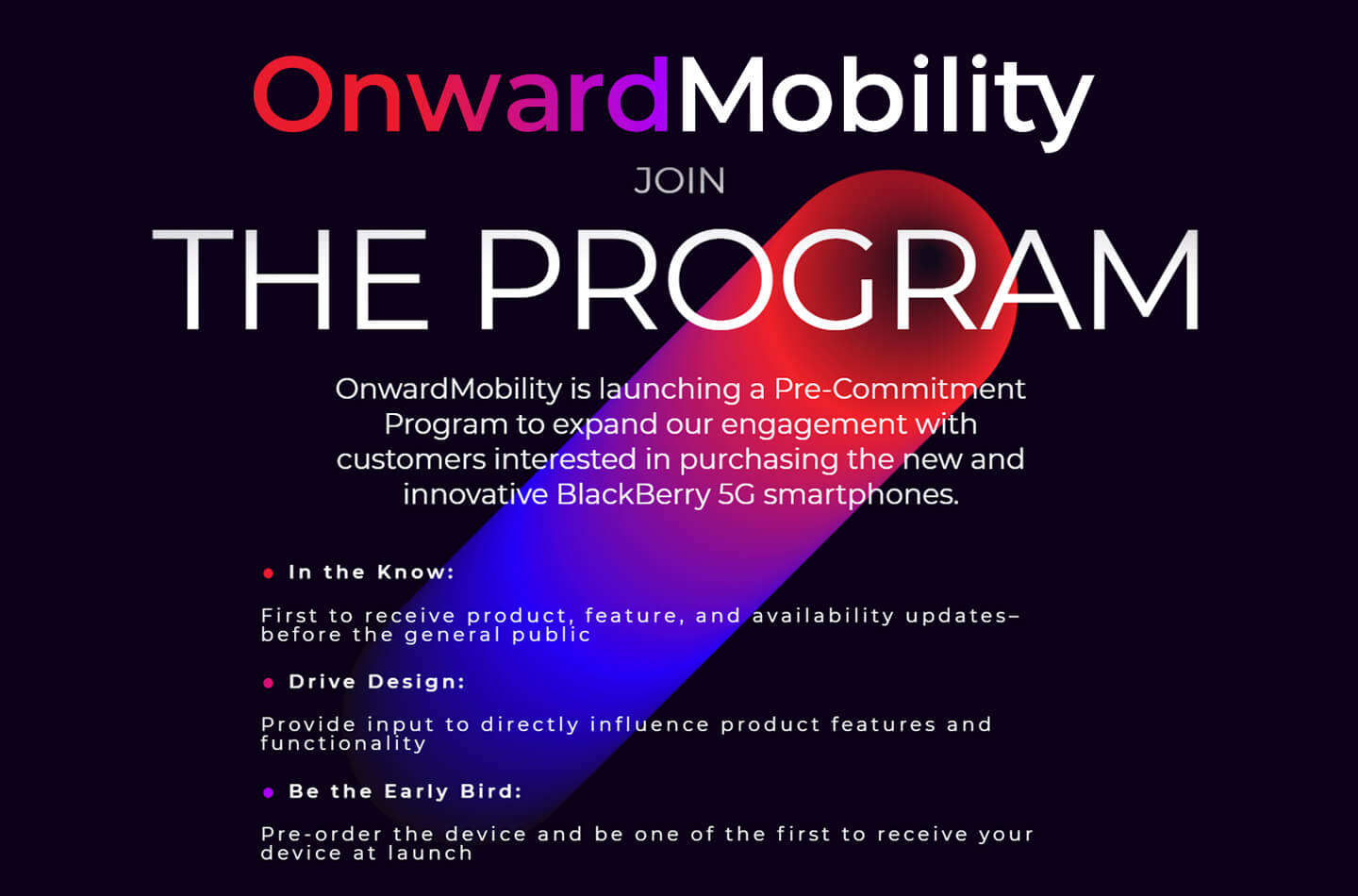 Last week, a Pre-Commitment Program was unexpectedly set up, where interested parties can register to closely follow product developments. The webpage shows that the new smartphone is still under development. Nevertheless, it remains unknown when a possible release is planned.

It is also remarkable that OnwardMobility gives everyone who signs up the opportunity to indirectly influence the product features and the design. This seems to indicate that a lot of final decisions still have to be made before the device can actually be released on the market. It remains to be seen whether it will actually be a 2021 model, or whether we have to be patient until 2022.

It is also striking that the page talks about ‘BlackBerry 5G smartphones’ – in plural. From this we can conclude that there are several models involved. However, no information is known about the differences between them. In addition, it remains unknown whether these devices will be introduced simultaneously. After all, OnwardMobility is just a small company, with limited capabilities. To immediately release multiple models, that entails a risk. 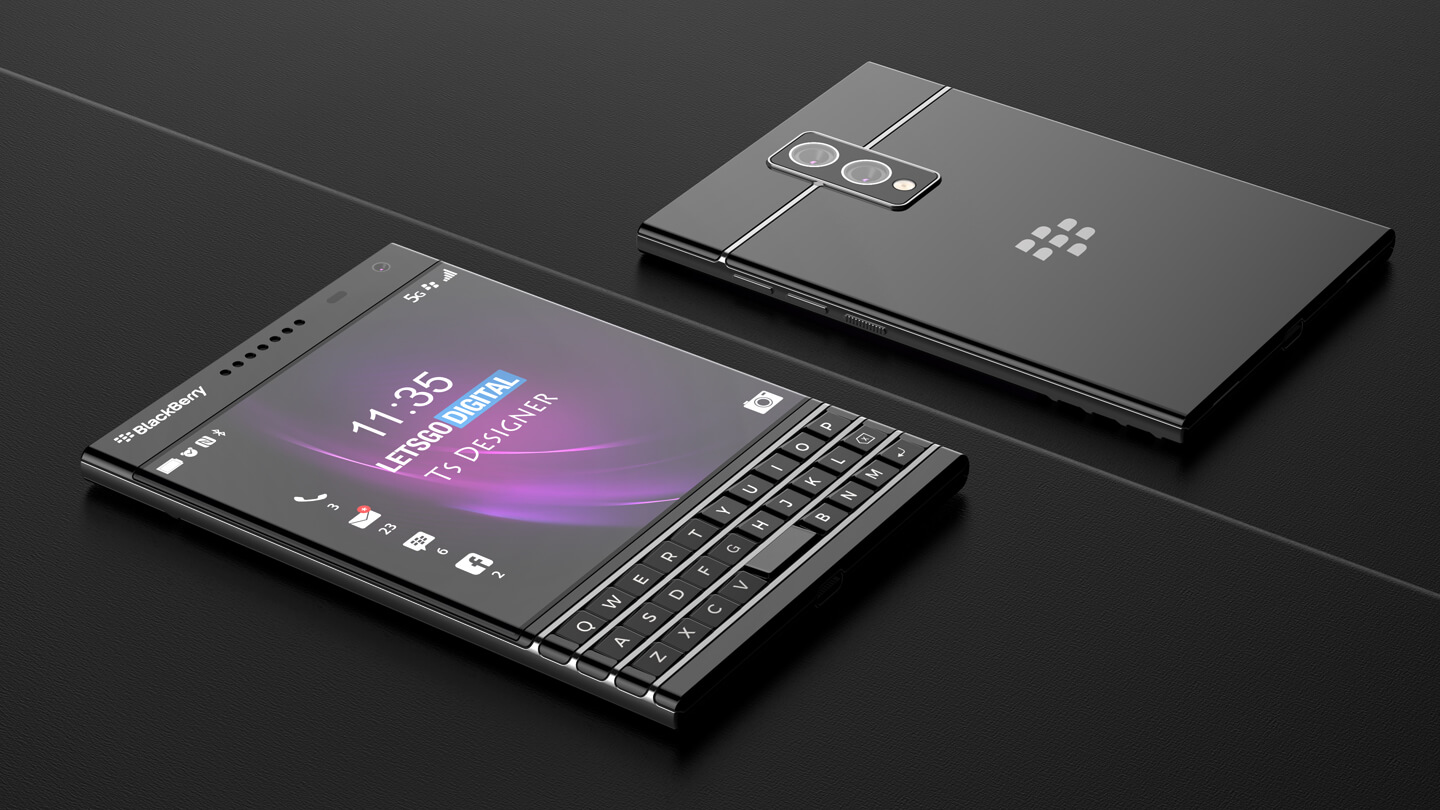 OnwardMobility is an American company headed by CEO Peter Franklin. The company has already built up expertise in the field of mobile security software for companies and governments. You can therefore assume that the new BlackBerry smartphone will have professional security functions – which the brand has always been known for.

In the field of hardware, the American company has significantly less experience. As a result, Onward Mobility has found a partner in FIH Mobile Limited, a subsidiary of Taiwanese Foxconn. FIH Mobile Limited is familiar with the manufacture of handsets and also understands mobile/wireless communication equipment. FIH is also involved in 5G, IoV (Internet of Vehicle) and AI (Artificial Intelligence).

Many are curious to see where this new combination will lead. This has also inspired several graphic designers to create BlackBerry concept models. Earlier this year, Jermaine Smit designed a high-profile BlackBerry Key 3 with triple camera and graphic designer Neil D created a unique BlackBerry smartphone concept with a display keyboard.

From the BlackBerry Passport 2 to the Key 3, all concepts show a different design. This is partly because there is simply still a lot of information missing. OnwardMobility will no doubt try to honor the powerful features of BlackBerry and add some modern technologies to it. 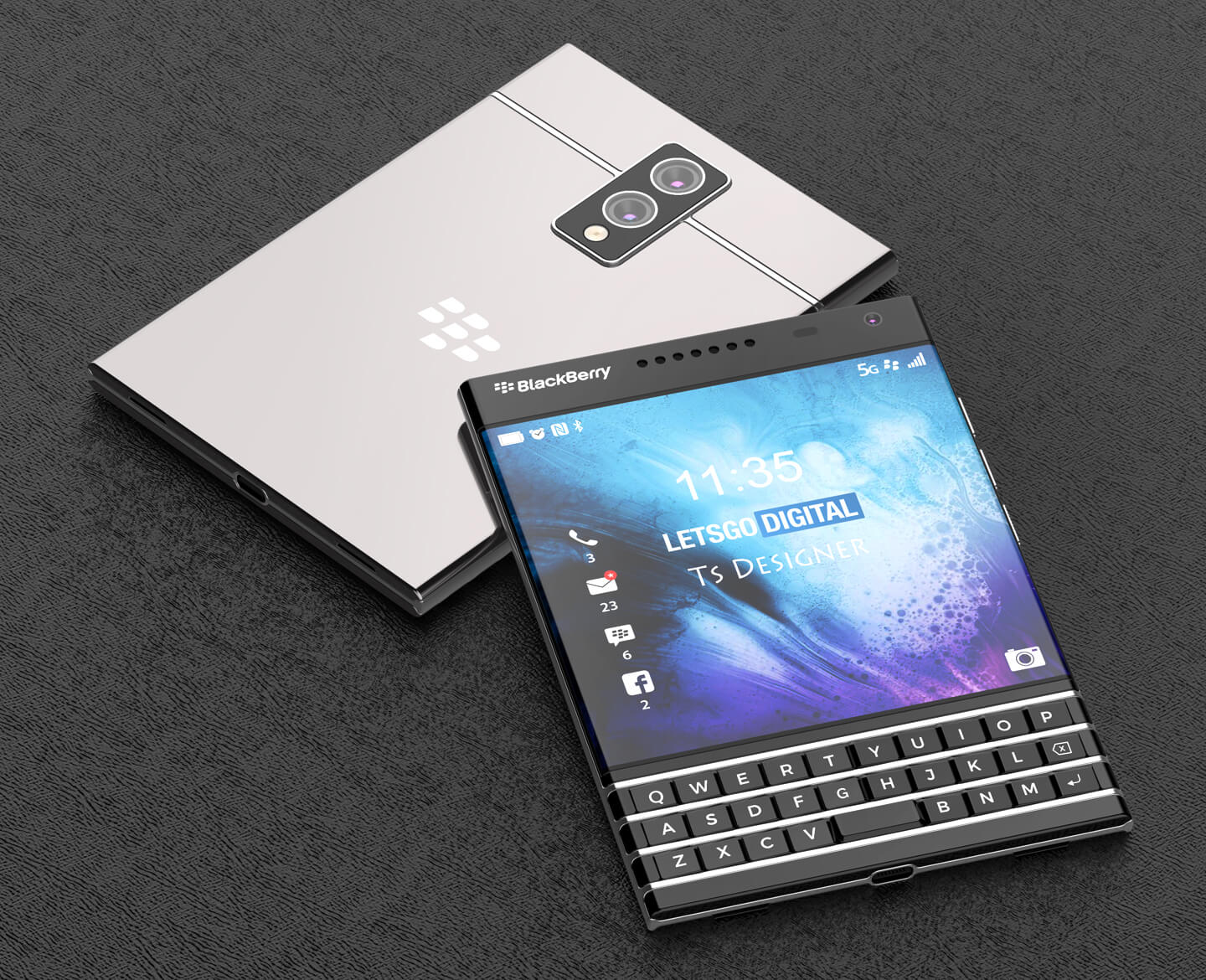 In any case, the new BlackBerry phones should appeal to both consumers and businesses. Because although consumers have been served their wishes in recent years, OnwardMobility believes that some optimization steps can still be implemented in the field of security for companies and government agencies.

Apart from the release date, it remains to be seen at what price the new BlackBerry 5G will be put on the market. Judging by what OnwardMobility has already revealed, it seems to be a high-end smartphone, with the latest pro-level security features, 5G and an advanced camera. You should therefore not be surprised if the device becomes more expensive than previous models.

Nothing is known about the model name as of yet. It is certainly not inconceivable that a completely new model name is chosen. It is possible that OnwardMobility will offer more clarity in the coming months, until then it simply remains to be seen. 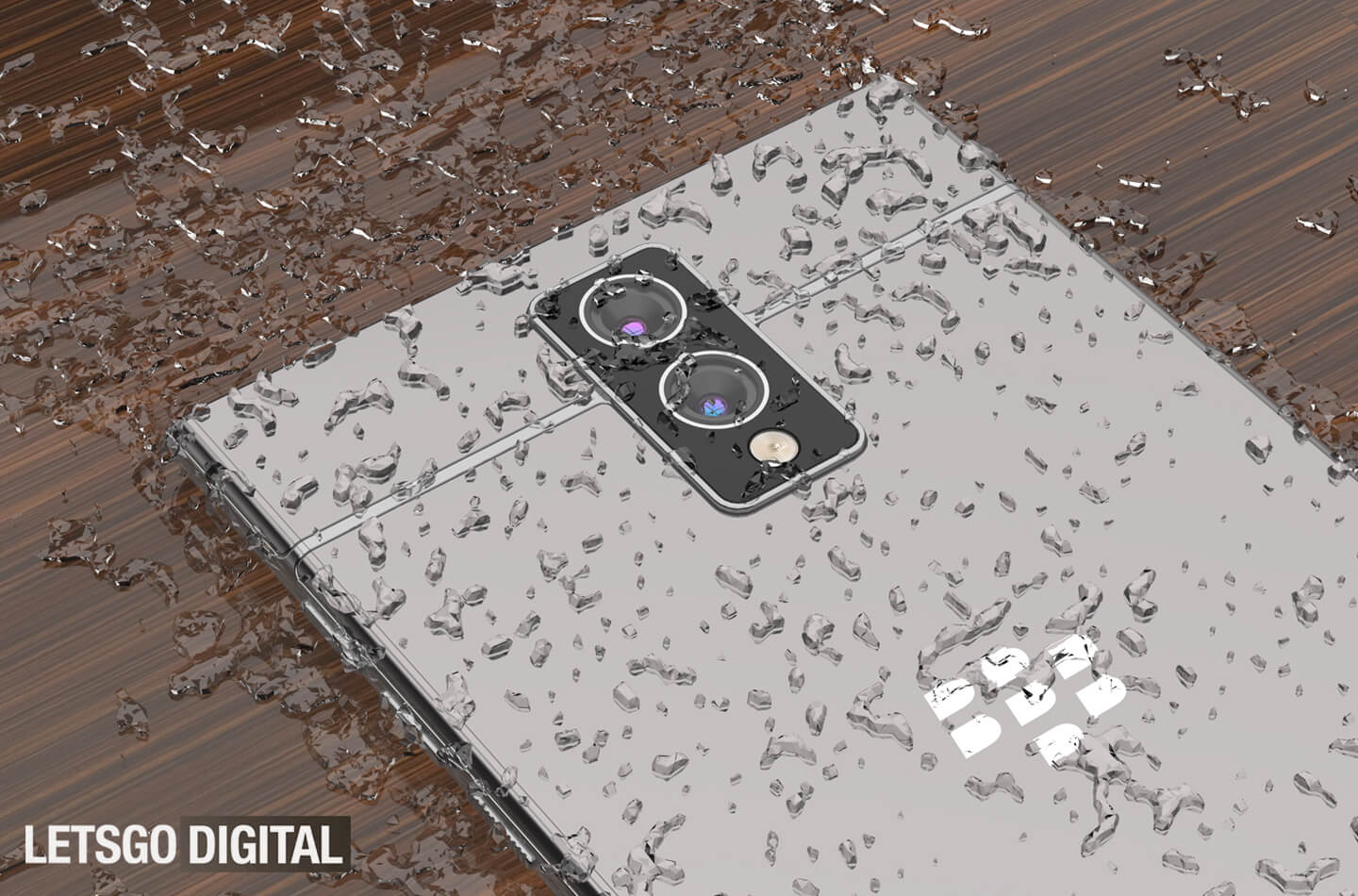 Note to publishers : The product renders in this publication are created by Ts Designer in collaboration with LetsGoDigital. The 3D renders are for illustrative purposes only. This product is not for sale. You can use the copyrighted images for your own website, YouTube and/or social media channels, please be so respectful to include a clickable source link into your publication.

Earthquake in Haiti: the toll is even heavier