A deflationary event on Ethereum

The implementation of the eagerly awaited EIP-1559 made it possible to start the “burn” mechanism, which aims to better manage transaction costs on the network. The “London” update introduced “base charges” for transactions, which are automatically adjusted based on network congestion. This also automatically burns part of the fees generated for each transaction. In the medium term, this limits ETH inflation.

In the last 24 hours, more Ethers (ETH) have been burned on the network than new units created, meaning there is less ETH available than the day before.

Over the period covering Thursday to Friday, the growth in ETH supply turned negative. More ETH was burned than the 13,200 ETH issued by miners. This can happen when base charges adjust upward during times of high demand.

Already $ 637 million worth of ETH burned

Unsurprisingly, it is the area of ​​non-fungible tokens (NFTs) that represents the largest number of ETH burned. According to the site Ultrasound.money, the OpenSea marketplace represents the biggest infernos, followed by network transactions. 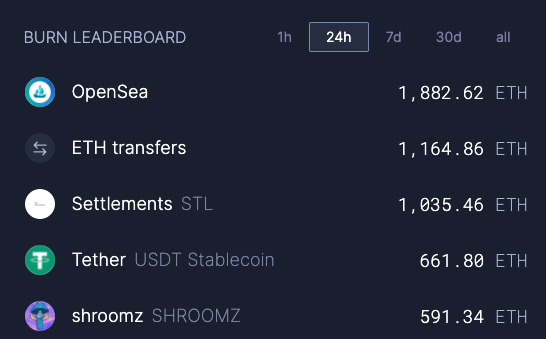 👉 To read on the same subject: Vitalik Buterin admits the mistakes made when creating Ethereum (ETH)

Engaged in the crypto ecosystem since 2017. I am particularly interested in decentralized finance (DeFi), Ethereum 2.0 and non-fungible tokens (NFT).
All articles by Florent David.

The United States will provide $5 million in aid to Thailand in the fight against COVID-19.

PayPal to enable the purchase of cryptocurrencies in the UK