Cream Finance once again in turmoil

Rekt – This is almost a quarterly meeting for the world of decentralized finance (DeFi)… For the third time this year, and the fifth time since its creation, the Cream Finance protocol has been the victim of a attack, and not the least.

With a notorious flash loan attack, a hacker stole the equivalent of $ 130 million from the protocol. It was the crypto-security company PeckShield that detected an unusual flash loan, and immediately alerted the crypto-community on Twitter.

According to the data available on Etherscan relating to the offending transaction, the attack is particularly complex. This involves 68 different crypto-assets and will have cost nearly 9.16 ETH in gas costs for its execution, or the equivalent of 37,000 dollars.

At the time of writing, the attacker’s smart contract still has $ 92 million in several tokens, and the address of the creator of this same contract accumulates $ 23 million. Since the attack, funds are constantly being sent to other wallets via mixers.

Shortly before the publication of PeckShield’s tweet, the price of the CREAM token began to drop sharply. The protocol’s crypto asset lost nearly 35% in just over an hour, from $ 158 to $ 103. 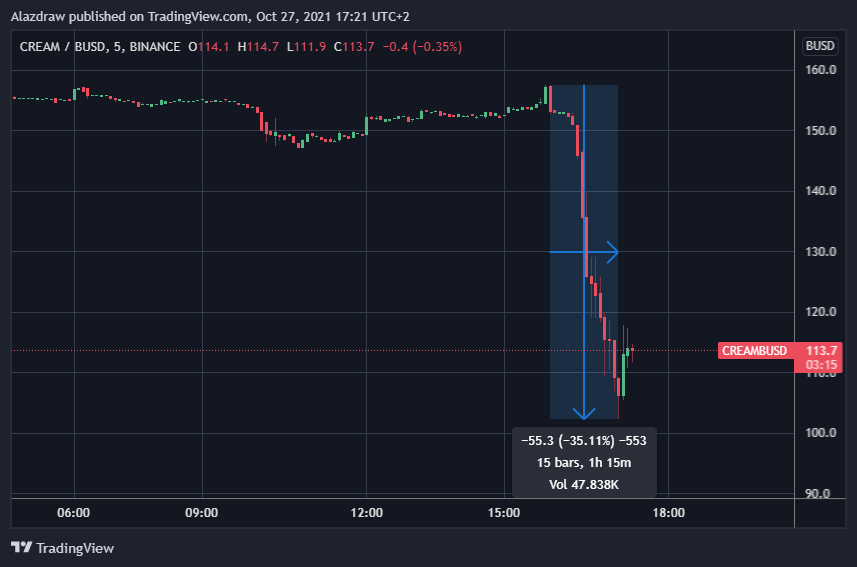 According to our colleagues from the media Rekt, this would be the third most important hack in the history of DeFi in terms of stolen funds. And as we mentioned at the beginning of this article, Cream Finance is somewhat used to exploiting its flaws … Last February, the protocol lost $ 37.5 million, a notable hack followed by another last August, valued at $ 18.8 million.

Cream Finance quickly confirmed the hack and will provide more information on it in the coming hours.

We are investigating an exploit on CREAM v1 on Ethereum and will share updates as soon as they are available.

Pregnant woman snatched by a cobra, tragically passed away before arriving at the hospital Doctors miraculously survived caesarean section