Huawei roll-up smartphone with large flexible display that covers the front and back. Thanks to magnets, the flexible screen also remains wrinkle-free when rolled out.

Huawei went through tough times, but the Chinese manufacturer still manages to innovate. Earlier this year, the company launched an entirely new foldable smartphone, the Huawei Mate X2 with inward folding screen as a counterpart to the Samsung Galaxy Z Fold 2. The Huawei P50 series has also been officially introduced, as the first smartphones that run on the Huawei P50 series. developed HarmonyOS. Thus the question arises; what can we expect from Huawei in the coming period?

It seems that the company is also actively developing a rollable smartphone in addition to the Huawei Mate 50 series. The following extensive and detailed patent shows that the development is now at an advanced stage. 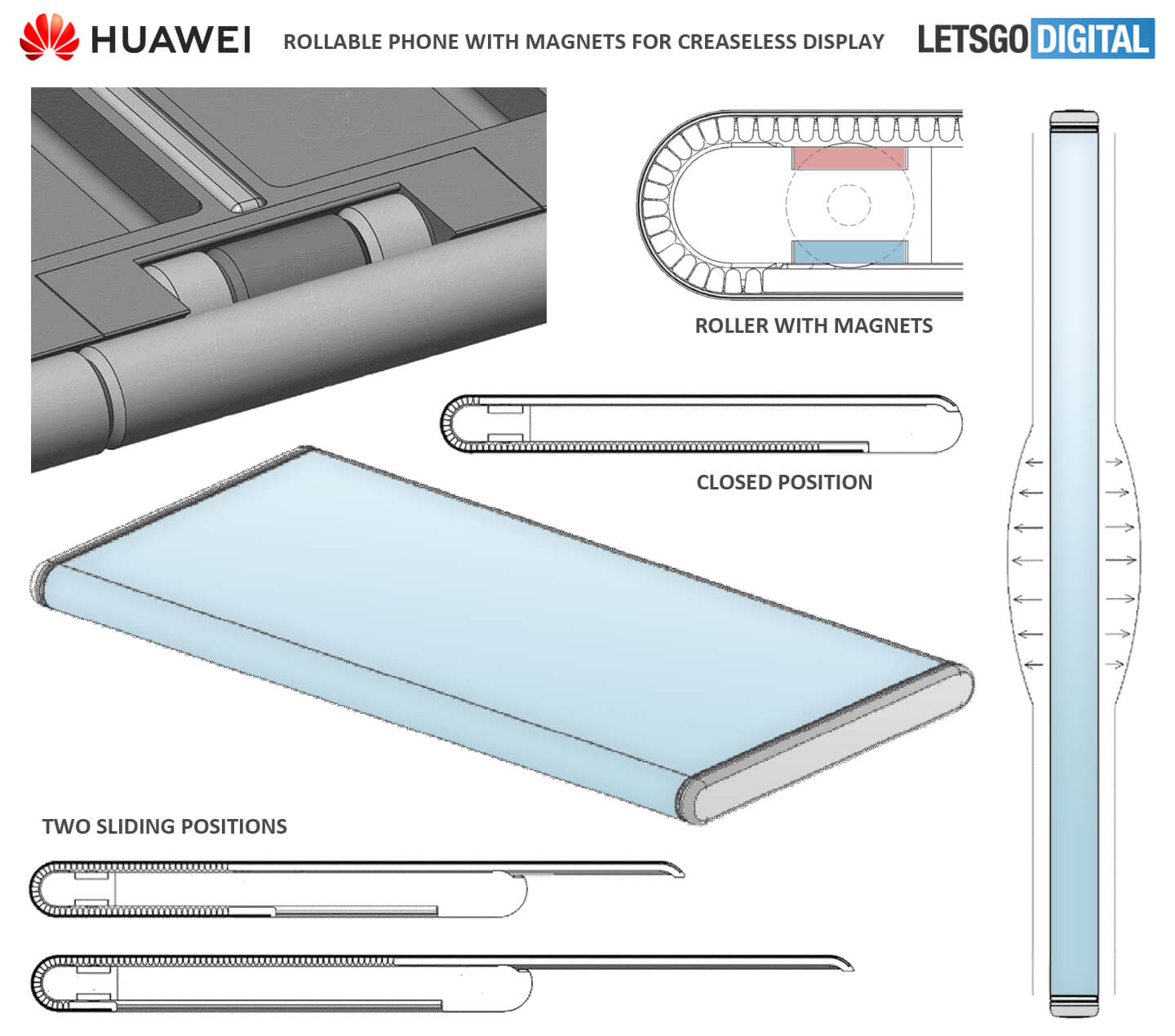 On January 31, 2021, Huawei Technologies filed a patent with the World Intellectual Property Office (WIPO) called ‘An electronic device having a rolling display comprising magnetic means for flattening the display when extracted’. The 21-page documentation was published today, August 5, 2021.

The documentation seems to build on a patent that Huawei has already applied for in April 2020 for a Huawei smartphone with a sliding screen. At that time, the design was fixed. Meanwhile, the development of this seems to have progressed further, with Huawei running into a problem.

When you pull out the roll-up screen, it will want to deform – this is partly due to the fact that the screen is rolled out along the side of the device. To prevent the screen from getting creased, two magnets are placed in strategic places, so that the display is pressed flat against the device and looks wrinkle-free – regardless of whether you pull the display out.

A roller is placed between the two magnets, which is a fraction larger than the thickness of the housing – as shown in the patent image above. In this way, the roller ensures that there is some form of play between the pull-out display and the magnets. In this way unwanted friction can be prevented, which would complicate the rolling up and unrolling process.

Furthermore, the documentation states that the Huawei rollable smartphone will be equipped with a POLED display (plastic organic light emitting diode) with a plastic base layer, such as polyethylene terephthalate (PET) and polyethylene naphthalate (PEN).

It is a very detailed patent, which is mainly aimed at preventing unwanted screen creases. In addition, another detail is revealed, the device will have 3 modes. You can roll out the screen a little bit, roll it out a little further, or don’t roll it out.

When the display is fully rolled out, the display surface will be approximately 70% larger than in its most compact form. That means you could pull out a 6.5-inch phone to a whopping 11-inch display size. You suddenly have a full-fledged tablet in your hands.

The image above is taken from the corresponding patent that was already filed in 2020.

Huawei is certainly not the only manufacturer involved in the development of rollable smartphones. LG Electronics was the first manufacturer to publicly announce that it is working on a rollable device, but the LG Rollable will no longer be released after LG decided to say goodbye to the smartphone business earlier this year.

Oppo has also already shown a prototype, the Oppo X 2021 is a concept smartphone with a rollable display. However, with this device, there is no screen visible on the back. This model is also less extendable, the 6.7” display can be enlarged to a 7.4” screen. Several reviews and previews have shown that the roller mechanism is still quite noisy. However, the screen remains nice and flat, even when rolling out. We do not know whether magnets are also used here.

The Chinese TCL has also shown a prototype, in April this year the TCL Fold ‘n Roll was shown. You can fold and unfold this smartphone. In its most compact position you have a 6.8” screen at your disposal, which you can open up to an 8.85” copy. Do you need an even larger display surface? Then you can extend the device into a full 10-inch tablet.

Another manufacturer that should not be missing from this list is Samsung. In May this year, the company’s display division showed a slideable display device that resembles the Oppo model in terms of design. Samsung also recorded two potential model names; the Galaxy Z Roll and Galaxy Z Slide. Samsung is expected to release its first rollable smartphone with a pull-out display in 2022. It can certainly not be ruled out that Huawei will follow soon.

Finally, Huawei, together with Samsung, is one of the only smartphone manufacturers in the world to have released two different foldable smartphone models. The Huawei Mate X and Mate Xs both had an outward folding screen. The newer Huawei Mate X2 features an inward-folding display, similar to the Samsung Galaxy Z Fold 2 – and Galaxy Z Fold 3 expected next week.

Rollable smartphones seem to be the next trend. Although Huawei is going through tough times, the company seems determined to keep innovating. It is therefore not inconceivable that the first rollable smartphone from Huawei will be introduced next year.

View the documentation of the Huawei rollable smartphone with magnets here.