If there is one non-fungible token (NFT) project that has caught the eye because of its originality, it’s Loot! If you’ve spent some time on Twitter, or even OpenSea in September, you’ve probably realized the importance that the news has brought to this unexpected work, to say the least.

In this series of 3 articles, Cryptoast invites you to explore various aspects of a project that has caused a lot of talk. So, make yourself comfortable and let yourself be told the story of Loot (for Adventurers) …

A project to bring them all together and, in art, link them

On Friday August 27, Dom Hofmann, co-founder of the media Vine, announced on Twitter the launch of a new project on the creation of games through the metaverse, through the prism of NFTs: Loot (for Adventurers).

– randomized adventurer gear
– no images or stats. intentionally omitted for others to interpret
– no fee, just gas
– 8000 bags total

available via contract only. not audited. mint at your own risk pic.twitter.com/uLukzFayUK

The concept could not be simpler: create 7,779 lists of unique items worthy of the Dofus game sets. All without illustrations, statistics or precise rules, just to leave room for everyone’s interpretation and imagination. White text on a black background, no more no less.

Bags # 1 through # 7,777 of the unaudited project can be claimed by anyone, while bags # 7778 through # 8000 have been reserved for whoever deployed the smart contract.

Surprise, the NFT community quickly took an interest in the project and all the Loots found a buyer before migrating to secondary markets such as OpenSea.

👉 Find all the news about non-fungible tokens (NFT)

The man behind Loot

Let’s come to the creator of this movement: Dom Hofmann, best known for having co-created Vine, a medium that helped install the short video format, taken over by TikTok, on mobile devices.

In 2017, he launched Peach, a social network attracting many users, although his brief moment of glory has faded since. More recently, he participated in an attempt to relaunch the Vine application, called Byte.

Through these experiences, Dom has forged his own idea of ​​the functioning of a social network, of a community. He understood, among other things, that the lore, the fictional universe, unites the participants of an adventure around a common culture and history.

A software engineer, Hofmann has kept a keen eye on the cryptocurrency world as it has evolved, occasionally digging into certain projects to better understand how they work and their scope.

Particularly captivated by the applications offered by the smart contracts of the Ethereum network, he was introduced to Solidity in December 2020.

As he learned, he became more and more interested in the use of non-fungible tokens in order to inspire decentralized creative projects and decided to create Supdrive, a fantastic game console operating on the blockchain. Ethereum, in August 2021.

In March, he launched Blitmap, which is described as a “participatory fantasy universe” and which will serve as a model for what Loot would become. 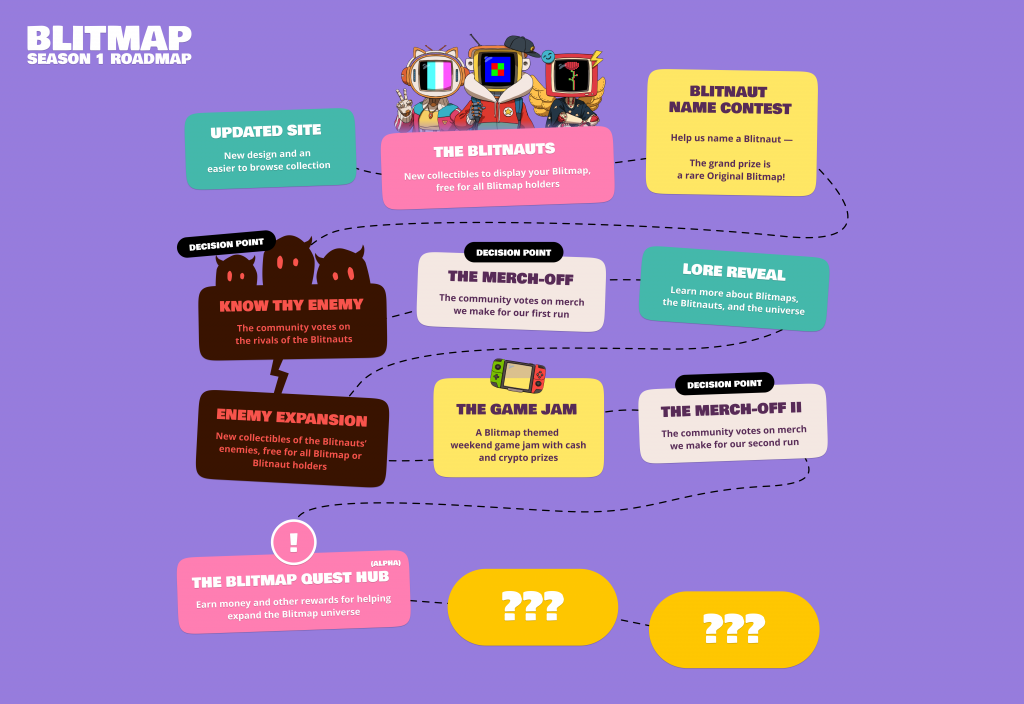 The idea is to use the Blitnauts and their antagonists as the basis for some sort of digital equivalent of the Marvel Cinematic Universe, turning the characters into spinoffs and games from a cohesive multiverse.

The project has had some success, with the cheapest Blitmap costing at the time of writing 10 ETH (around 38,000 euros). But more importantly, he set the stage for what was to come …

👉 To read: The OpenSea platform now processes 98% of the total volume of non-fungible tokens (NFTs)

Indeed, Hofmann had long been driven by an idea: to create a purely textual adventure, close to that which served as the basis for certain narrative games such as Dungeons & Dragons.

Since launching Blitmap, Hofmann has been thinking about other ways to foster the growth of participatory communities within games and art.

As part of the development of what was to become Loot, he coded a Random Object Generator: software that returned the names of various weapons, armor, and accessories.

The concept was simple: let the participants mine NFTs from this generator in order to see what would result. In doing so, he would give free rein to the improvisation of his program, promoting the participatory experience of unique creations.

Likewise, it would not provide any artistic direction or instruction. He would simply offer these “bags” of digital items for free, with no transaction fees, to anyone who wanted to generate them.

His goal was clear: to reverse the creative process of NFTs in order to let collectors create together their lists, their universe, their narrative and ultimately their game.

This is what I have been SUPER EXCITED about …

Loot is something different. It’s something that has never been done before ever.

It’s a bottom-up approach. Instead of the creator adding value to the NFT after it is created, they let the community decide its value. Thus, the value of the NFT is no longer linked to the subjectivity of collectors, but to the creativity and commitment of the community.

In this sense, Ethereum works on the same model: you can go to GitHub and code, bring new ideas to Ethereum by writing a proposal for a new EIP.

It was in this context that Loot was born, a project that would trigger a major hype in the world of NFTs.

In the second installment of this series dedicated to Loot, we will see how the community reacted to this new value proposition and what innovations this project sparked.

the value locked on “layer 2” reaches a new record