As part of its “CHAMPIONS 4 YOU” campaign, commemorating the club’s 4 titles in League 1, the Lille club has partnered with the Rarible marketplace to offer a special collection of non-fungible tokens (NFT).

“The LOSC is taking advantage of blockchain technology to strengthen its digital presence and offer unprecedented virtual products to its supporters as well as to all fans of technology, football and NFT,” can be read on the official press release of the club.

For the occasion, the LOSC has created 4 unique pieces. These will bear the effigy of the rings of champions representing the 4 national titles of the club. Each ring will display a style faithful to its time, “creating a timeless link between the epics of 1946, 1954, 2011 and that of 2021”. 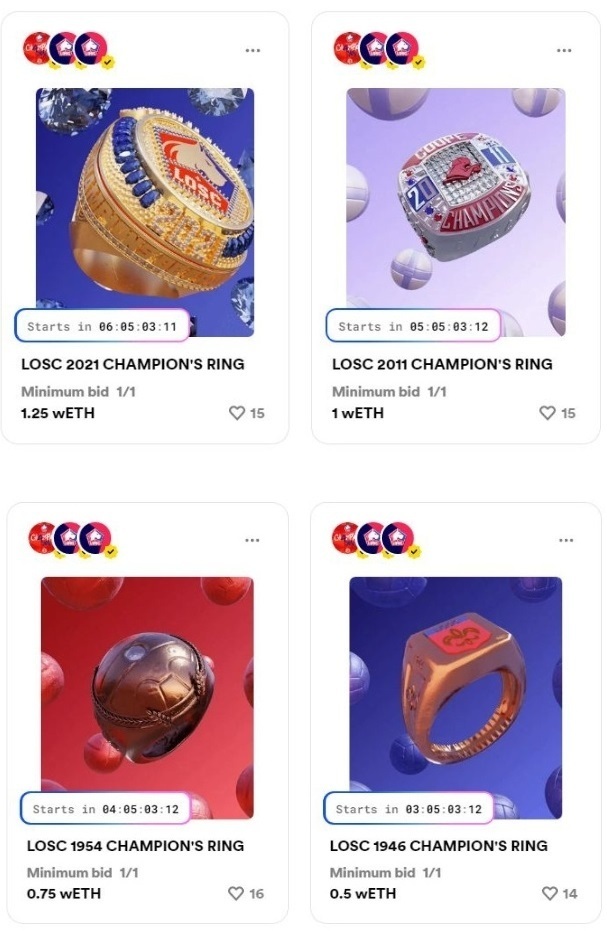 In addition to this, the Lille club wanted to create a virtual ticket “CHAMPIONS 4 YOU”, issued in a limited series of 100 copies. It represents a match ticket and showcases the club’s four historic seasons.

The auction of this piece has already started yesterday and around 80 copies have already been sold at the time of writing.

A first in French sport

Through this initiative, the Lille club becomes the first French sports institution to use blockchain technology, and more particularly NFTs, to promote or celebrate an event.

“Putting innovation and creativity at the service of the institution: by launching, for the first time in France, NFTs celebrating the achievements of a football club, the LOSC wanted to offer a new way of expressing its passion for the club, ”said Olivier Létang, CEO of LOSC.

The Lille club is positioned as a pioneer of football in Europe and would even have “the ambition to make this new form of link between the fans and the club over the long term”.

However, this is not the first European club to embark on the NFTs adventure, since a few days ago, AS Roma signed a partnership with Zytara Labs in this direction.

In general, the world of football is increasingly opening up to blockchain and non-fungible tokens. Some players have already taken the plunge individually by launching a series of NFTs in their image. This is the case of the Brazilian star Ronaldinho, or the captain of the Italian selection, Georgio Chiellini, on the eve of the final of Euro 2020.

Obviously, the French game Sorare is one of the first architects of the democratization of the blockchain in the world of football. When Euro 2020 was launched, a license agreement was signed with the French Football Federation. The players selected for the competition were then tokenized in the form of NFTs.

Going forward, it is not unlikely that we will continue to see football highlights immortalized on the blockchain. The LOSC initiative is likely to pave the way for other Ligue 1 clubs to strengthen their ties with their fans.

👉 Find all the latest news on non-fungible tokens, or NFTs