Samsung is about to introduce the new Galaxy Z Fold 3 and Galaxy Z Flip 3 foldable smartphones. Both new models will be officially announced on Wednesday, August 11. All details are now known about the two folding telephones, so the Russian Caviar has decided to announce two Limited Edition models. They are a black Z Fold 3 and a gray Z Flip 3, both models are made of titanium and decorated with a provocative skull.

It’s a somewhat remarkable decision by Caviar. At the beginning of this year, the company also designed a Galaxy S21 Limited Edition. This device was also introduced before the official introduction of the S21 series had taken place, but was taken offline shortly after publication on the instructions of Samsung Electronics.

This time it concerns two foldable models that are housed within the Skull Capsule collection. The Galaxy Z Fold 3 has been given the matching name ‘Ragnarok’, the Z Flip 3 will be released under the name ‘Catrina Calavera’. Caviar has previously released unique models of both the Galaxy Fold and the Galaxy Z Flip. 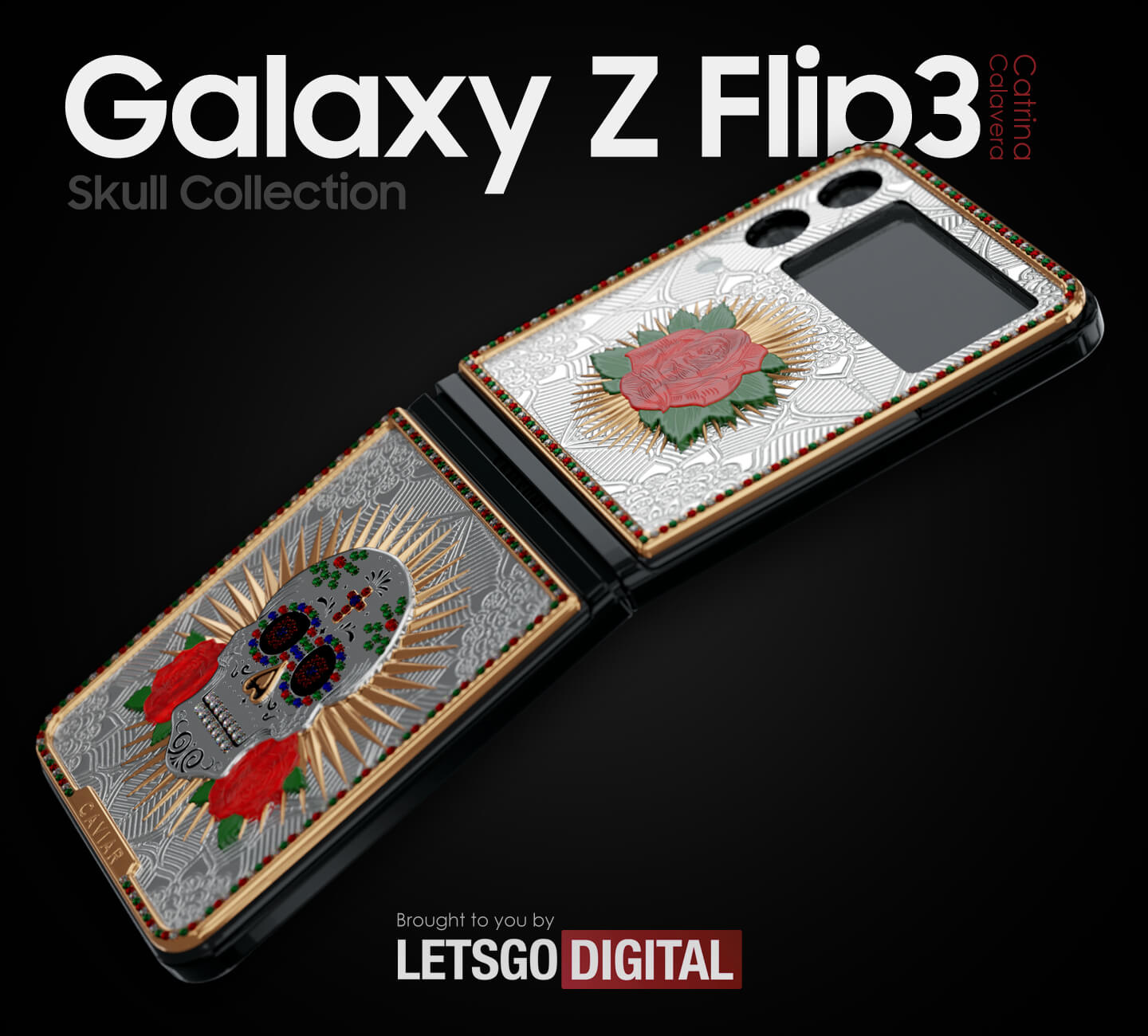 The name Catrina Calavera refers to ‘la Calavera de la Catrina’, a zinc etching made in 1913 by Mexican illustrator José Guadalupe Posada. The etching is originally a satire on elite women. The skeleton lady became best known after Mexican Diego Rivera incorporated the signature skull in his famous work ‘A Dream of a Sunday Night in Alameda Park’. Today it is a symbol for the Day of the Dead on November 1 and 2.

The eye-catching 18K white gold skull of the Catrina Calavera model is inlaid with numerous precious stones: diamonds, sapphires, emeralds and rubies provide a splash of color and dazzle in the sun. In total, no less than 419 gemstones have been processed in this Limited Edition model.

The Samsung Galaxy Z Flip 3 from Caviar will be released in a limited edition of 20 pieces. The number 20 is a lucky number within the Mayan tradition. This handcrafted smartphone is available for a starting price of $46,460 USD. 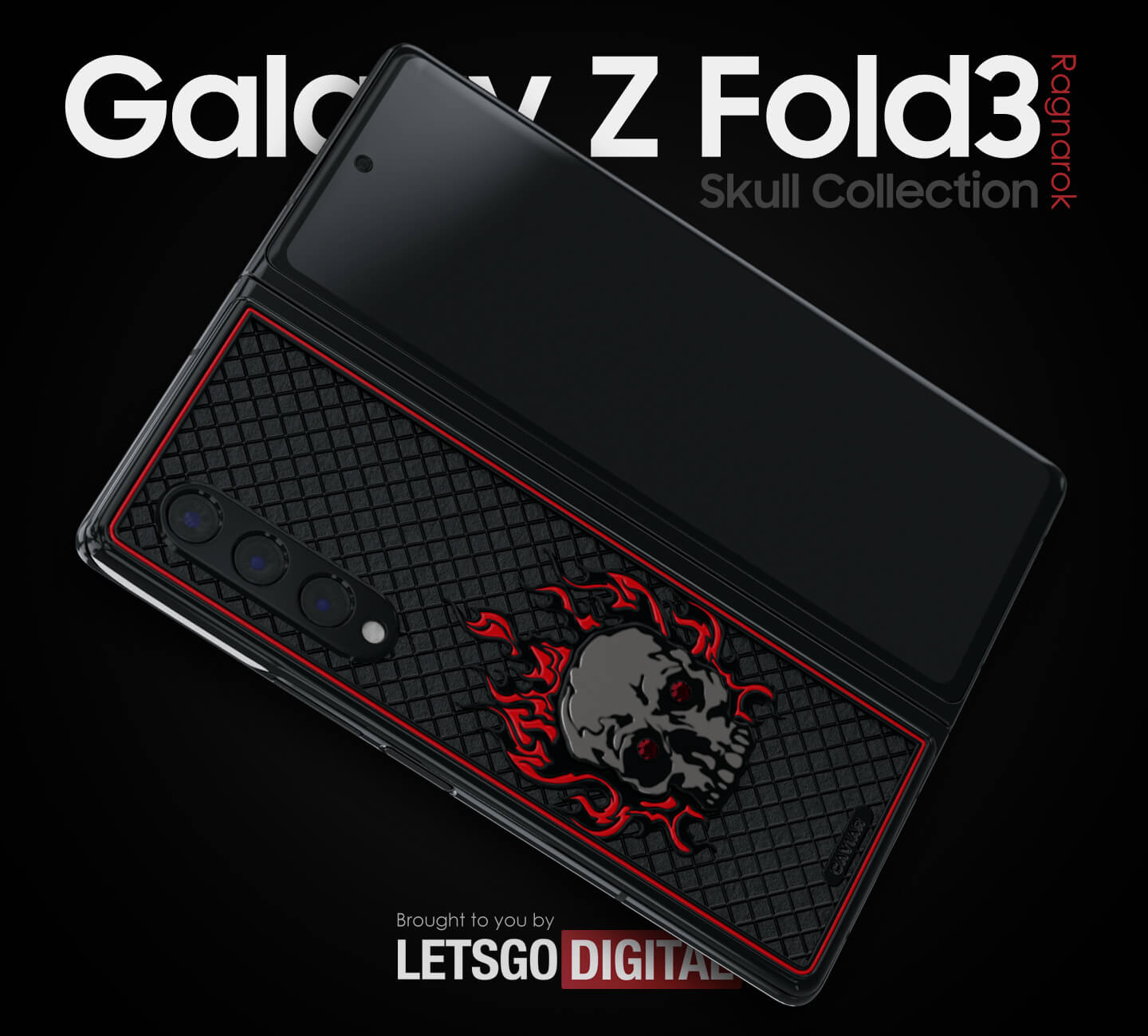 The Catrina Calavera design features vibrant colors like the streets of Mexico City on the Day of the Dead. The Ragnarok model, on the other hand, is presented in a darker color range with black and red. In the center of the composition is a fiery skull – the symbol of the Scandinavian king of fire, the giant Surt.

The skull is based on a composite stone with a deep night color and a geometric relief pattern, made with laser engraving technique. The eyes of Surt’s symbolic image are inlaid with bright red sparkling rubies. The flames around the skull are hand painted with jewelry glaze.

Legend has it that the blow of his fiery sword will give rise to ‘Ragnarok’ – the final battle of the gods. Caviar has opted for durable materials, with black titanium and impact-resistant composite stone that offer the smartphone extra protection and also give it a tough look.

The Caviar Galaxy Z Fold 3 Ragnarok edition will be released in a limited edition of 99 pieces. The cost for this model starts at $10,770 USD.

3 companies create a new tokenization tool based on Tezos (XTZ)