The Galaxy Z Fold 3 has been officially released by Samsung. The folding phone is water resistant, offers S Pen support and has an under panel camera.

Samsung has just announced two new foldable smartphones. During Samsung Unpacked 2021, the Galaxy Z Fold 3 and Galaxy Z Flip 3 were officially introduced. In this publication we limit ourselves to the new Fold, which has been improved in many respects compared to its predecessor. The most notable changes are the addition of S Pen support and the integration of an under panel camera. In addition, the 3rd generation Z Fold features a water-resistant housing for the first time.

Despite all these additions and improvements, Samsung has again managed to lower the suggested retail price. Where the original Fold was put on the market for €2,020, the Z Fold 2 received a more strategic MSRP of €1,999. With the new model, another €200 has been deducted from the sales price. For €1,799 you get 256GB of memory. If you need more storage memory, you can buy the 512GB model for € 1,899.

Although the folding telephone is cheaper than its predecessor, it is of course a considerable amount. The question is therefore; what can you expect for this price? Samsung has published an extensive Infographic, in which all the specs and features of the new model have been discussed. A comparison is also made with the old model, so you can easily see all the differences. 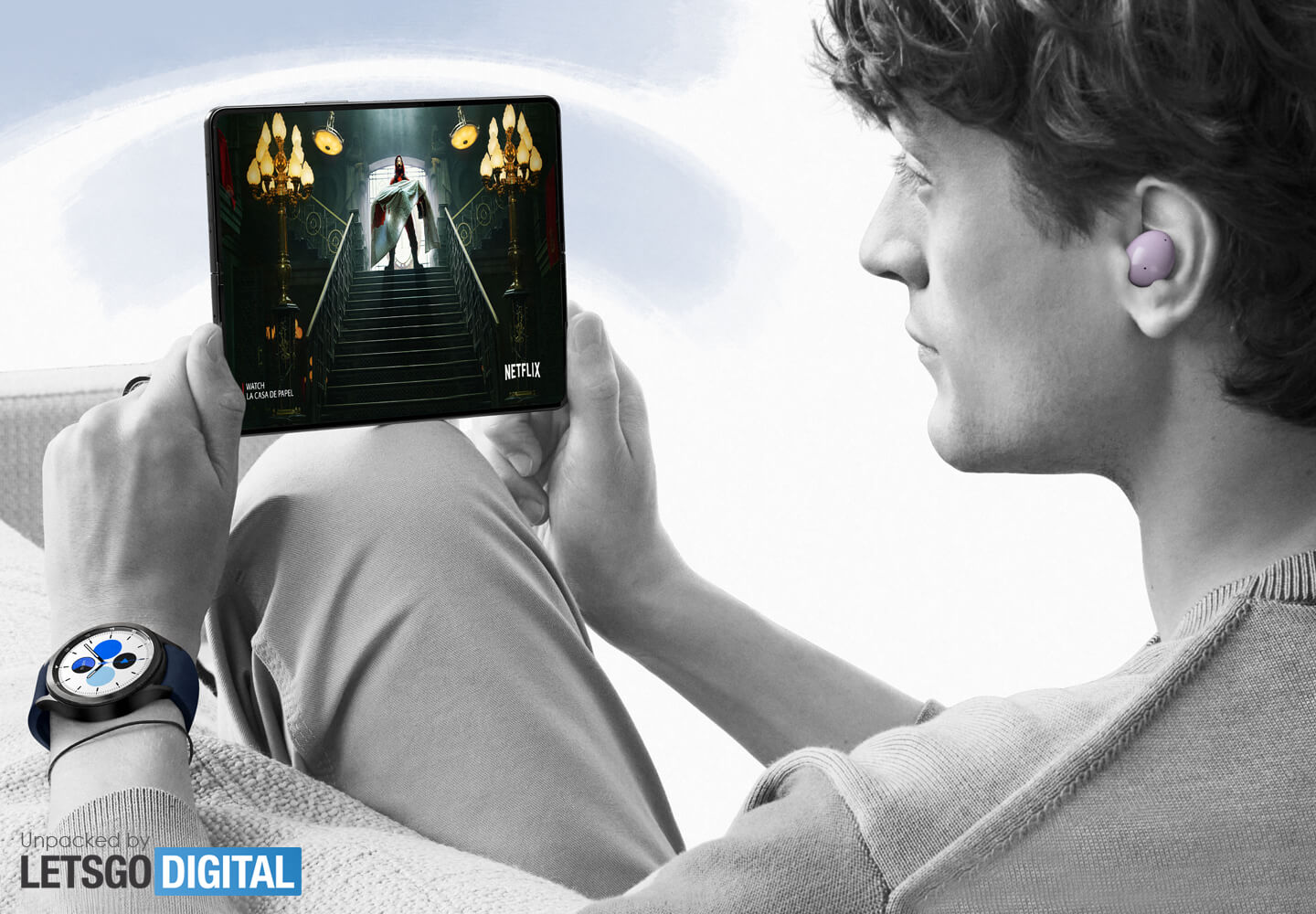 Last year the screen surface was increased, with the new model the display size has remained the same. It is a 6.2-inch HD+ Dynamic AMOLED display, the refresh rate has been increased to 120 Hertz. As soon as you unfold the phone, you will have access to a 7.6-inch tablet-sized screen with a QXGA+ resolution (2208×1768 pixels). This screen also supports the 120Hz refresh rate. Ideal when scrolling, moving images are also displayed much smoother thanks to the high refresh rate.

Although the display size is identical to its predecessor, Samsung has managed to reduce the weight. This was 283 grams and is 271 grams with the new model; a difference of 12 grams. In our Galaxy Z Fold 2 review, we experienced the weight as the main disadvantage. It is therefore positive to see that the new model is less heavy than before. Nevertheless, the difference with a regular smartphone is still fairly large, for comparison the Galaxy S21 Ultra (6.8″) weighs 227 grams.

Another important change from before is the IPX8 standard. This means that the Samsung Z Fold 3 is just as water resistant as other top models of the brand. You can take the foldable smartphone underwater for 30 minutes, up to a depth of 1.5 meters. Keep in mind, the device has not been tested for dust resistance. The device is equipped with an extra strong aluminum frame, also called Armor Aluminum by Samsung.

The foldable phone runs on the Android 11 operating system over which the One UI 3.1 user interface is placed. There are several unlocking methods available, you can use the fingerprint sensor via the power button on the side of the device, in addition, the smartphone is equipped with facial recognition technology. Of course, old methods, such as setting a password or a pattern, also remain.

The hardware has also been updated. The new model is powered by an octa-core Qualcomm Snapdragon 888 chipset. This is the most powerful processor at the moment with an integrated 5G modem and baked according to the 5nm process. This makes the Z Fold 3 a very suitable smartphone for multitasking, but also for gaming, for example. Samsung provides the smartphone with 12GB of RAM. In addition, there is a choice of 256GB or 512GB storage memory. Regardless of which version you want to buy, both offer UFS 3.1 support for fast data transfers.

So far, nothing has changed in terms of camera compared to its predecessor. You do not have to see this as a disadvantage, because although Samsung smartphones are certainly available with an even more advanced camera system, the image quality of the Z Fold 2 was certainly adequate, we concluded in our review at the time. Moreover, this time there are several additional functions available, thanks to the renewed operating system – as we have also seen with the Galaxy S21 series.

If you open the smartphone, not a single camera is visible – at least, almost none. The Galaxy Z Fold 3 is the very first Samsung phone with an under panel camera, in other words the digital camera is placed under the screen – without a hole or notch being made in the screen. Thus, the new folding device offers a full screen experience.

Samsung has opted for a 4 megapixel image sensor. That sounds rather meager, nevertheless the first experiences with this completely new camera system are better than expected. In addition, it is not necessary to use this camera for taking selfies, finally a cover camera is also available. It is therefore commendable that Samsung is the first to apply this new technology to a foldable phone.

Regarding the battery capacity, Samsung has again opted for a double battery. It has a total capacity of 4,400 mAh. This is somewhat remarkable, as the previous Z Fold was equipped with a 4,500 mAh battery. In practice, this will probably mean that the device delivers a slightly shorter battery life. The Z Fold 2 lasted about 11 hours on average, we assume for the time being that the new model should be charged after about 10 hours. The smaller battery is probably also the reason that the new model is slightly less heavy.

The charging options have remained the same, wired the device offers support for 25 Watt fast charging. In addition, you can opt for wireless charging, reverse wireless charging is also supported. Although a charger is no longer included in the sales package, you will receive a 25W Fast Charger as a gift during the preorder period. If you decide to place a preorder, you will also receive a handy Cover with S Pen included for free. Which brings us straight to the last part. 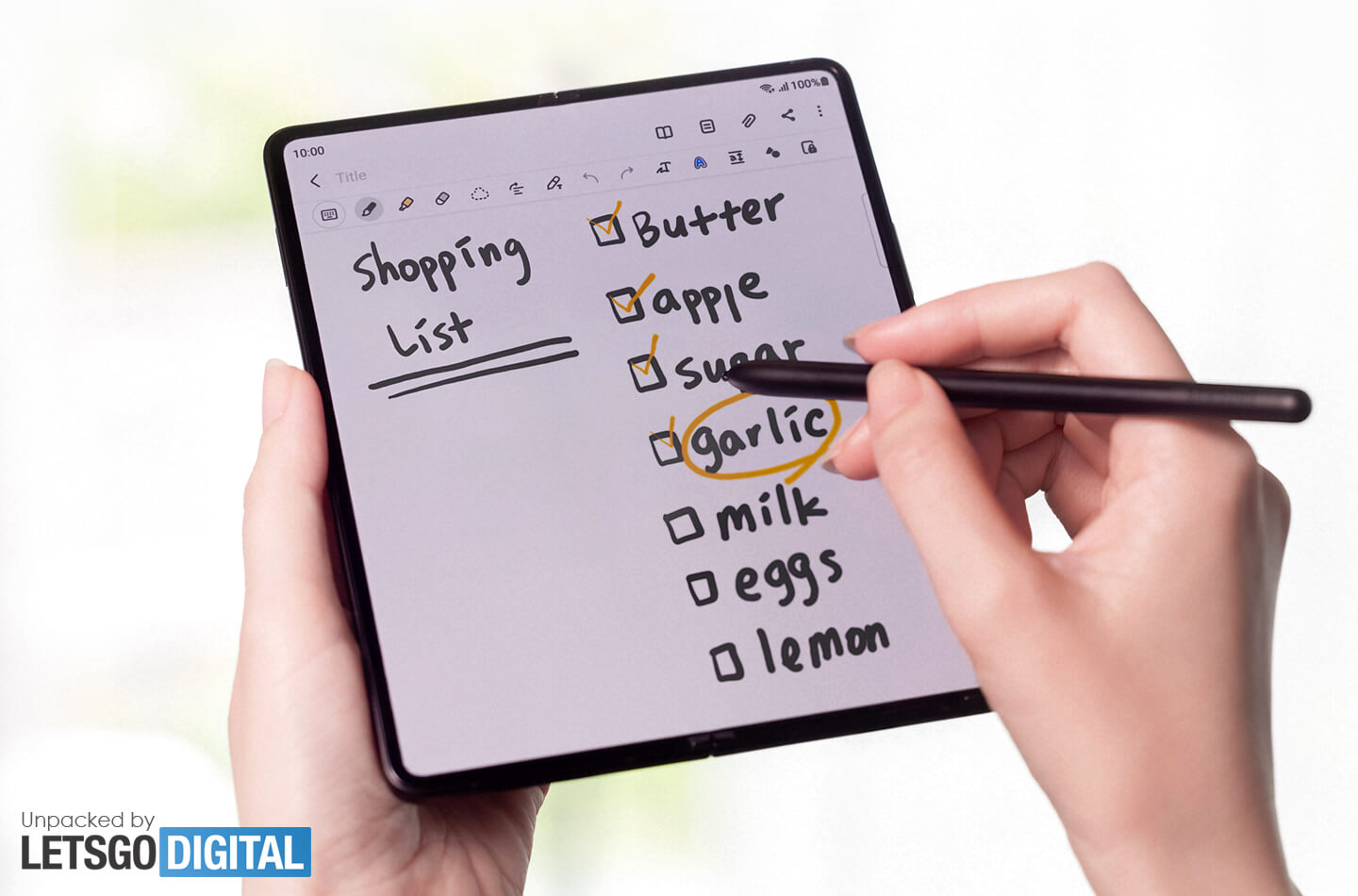 The Samsung Z Fold 3 is the first-ever folding phone to support the iconic S Pen. However, this is not included as standard, but will be offered as an optional accessory.

Previously, the stylus pen was only compatible with the Galaxy Note lineup. This year, however, no new Note will be released – a Galaxy Note 22 is expected again next year. Nevertheless, this has been the main reason for Samsung to equip the Galaxy S21 Ultra with S Pen compatibility at the beginning of this year. The same now applies to the new Fold.

Samsung has released two new stylus pens, both of which can be used with the new foldable smartphone. The S Pen Fold Edition is exclusively usable with the Z Fold 3, which has a softer and rounder pen tip, so that it cannot damage the flexible screen. This stylus also supports Air Commands, but does not have Bluetooth support.

The second stylus, the S Pen Pro, does offer Bluetooth support. This way you can also use the stylus to operate the device remotely, for example to take photos or to walk through a series of presentation sheets remotely – useful during a business meeting. This functionality is also already available with the S Pen of the Galaxy Note 20 Ultra – but not with that for the S21 Ultra.

The Pro model also has a switch, if you use the stylus for the folding phone, you should set it to ‘Z Fold’. If you use the stylus in combination with another S Pen compatible device – such as the S21 Ultra and the Galaxy Tab S7 Plus – then the ‘S Pen’ mode will suffice. In addition to Air Command, the S Pen Pro also offers support for Air Actions.

The foldable smartphone does not have a stylus compartment, instead Samsung has released several phone cases in which the S Pen can be stored. You can store this at the height of the hinge, the advantage of this is that the cover does not become extra thick when you store the S Pen. 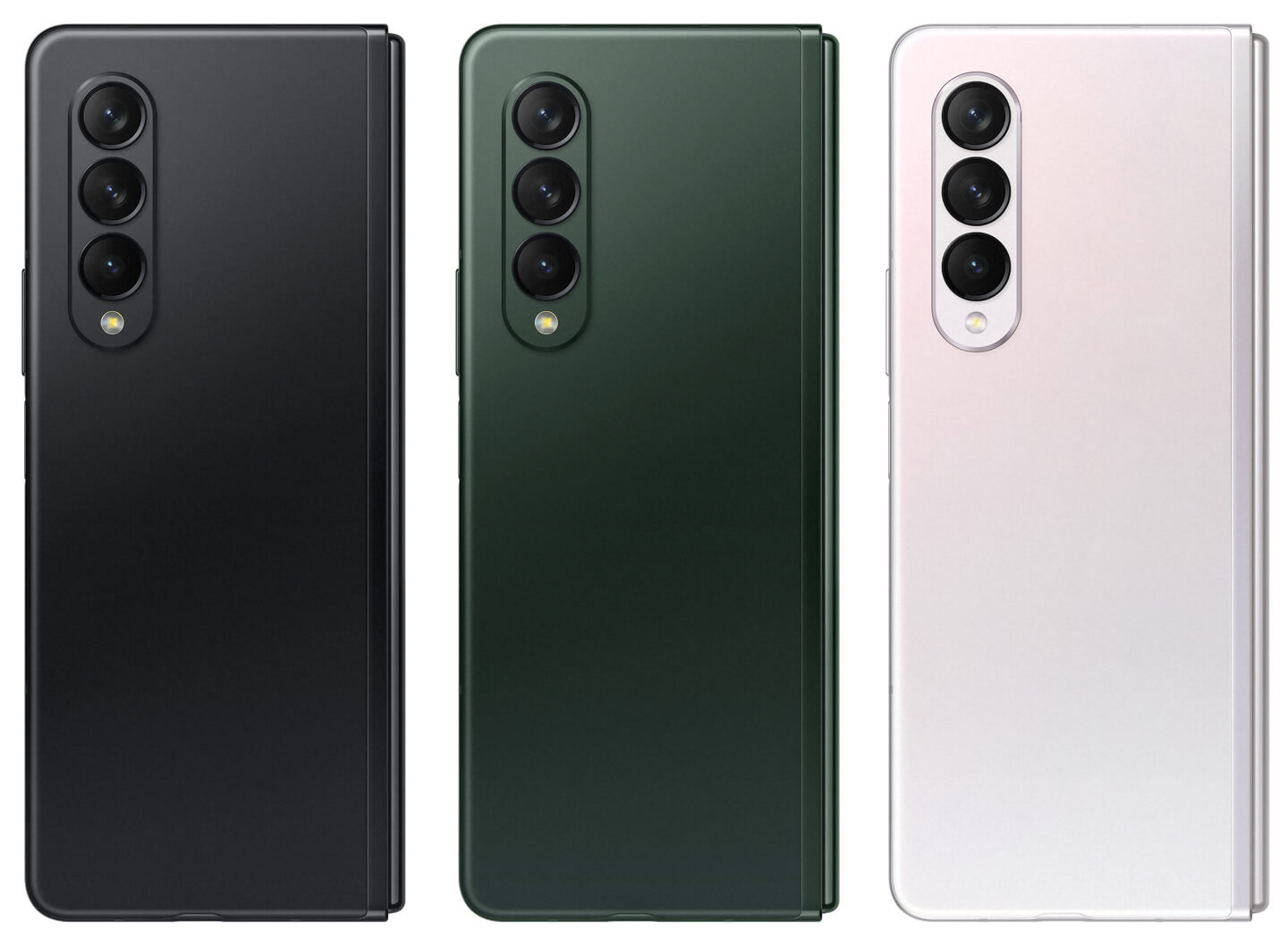 The Samsung Galaxy Z Fold 3 will be released in three colors: Phantom Black (black), Phantom Green (dark green) and Phantom Silver (silver). The covers are released in matching colors. In addition to the standard edition, Samsung has also announced a Z Fold 3 Limited Edition, again designed in collaboration with fashion designer Thom Browne. This time the special edition has a white color scheme, however this model does not seem to be released in the Netherlands.

Soon we expect to receive a test copy from Samsung Netherlands at the editorial office of LetsGoDigital. Of course you can expect a full Samsung Galaxy Z Fold 3 review, in which all the advantages and disadvantages of this foldable smartphone will be discussed in detail.

American Couple Shocked: 450,000 Bees Have Been Living Inside the “Wall of the House” for 35 Years