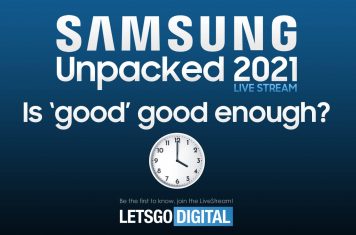 Is good, good enough for you? Under this slogan, Samsung will unveil a range of new mobile devices this afternoon. During the Galaxy Unpacked event, entitled ‘Get Ready to Unfold’, the South Korean manufacturer will announce two foldable smartphones, the Galaxy Z Fold 3 and the Galaxy Z Flip 3. Here you can already see the first Galaxy Z Fold. 3 and Z Flip 3 preview. Two new smartwatches are also expected, the Galaxy Watch 4 and the Watch 4 Classic, as well as new wireless earbuds, the Galaxy Buds 2.

Are you also curious about the new products that Samsung will announce this afternoon? The launch event can be followed live via the video stream below. The Galaxy Unpacked event will start at 4:00 PM Dutch time. Like every year, Samsung will make a spectacular show of it, which makes it definitely worthwhile to follow the product presentation.

Below you can watch the livestream of Samsung Galaxy Unpacked. You can set a reminder to receive a reminder shortly before the start.

In recent weeks and even months, both the Dutch and international press have reported several times about the expected products from Samsung. Several new innovations will be unveiled. For example, the Galaxy Z Fold 3 will be the very first foldable smartphone where the selfie camera is placed under the screen. This device is also equipped with S Pen support for the first time. Another major improvement over the Galaxy Z Fold 2; the new folding phone will be water resistant. The smartphone tablet will be just as waterproof as other top models of the brand.

The Galaxy Z Flip 3 will also be improved on several points compared to its predecessor. This foldable smartphone will also be equipped with a water-resistant housing. This time Samsung will also provide the clamshell with a two-tone finish, a larger cover screen and an extra robust Armor frame. In addition, the new model seems to be considerably cheaper than the previous folding phone from Samsung.

Samsung Netherlands says in a press statement about Galaxy Unpacked 2021: “The upcoming Galaxy Z Fold combines the best that smartphones and tablets have to offer. This way you enjoy a new way of working, connecting and creating. The Z Flip boasts an extra refined style and is made of more durable, stronger materials. The new Galaxy Z will feature the first-ever S Pen designed specifically for foldable phones. Rather than revealing a new Galaxy Note around this time, we’ll be extending popular Note features to other Samsung Galaxy devices. These devices are the epitome of the demand for versatile mobile technology.

As already indicated by Samsung, no new Galaxy Note smartphone will be released this year. Another Galaxy Note 22 is expected next year, but it is not that far yet. For a while it was thought (and hoped) that the Samsung Galaxy S21 FE would appear during Unpacked 2021, but we seem to have to have an extra month or two for that device.

In addition to the two foldable smartphone models, Samsung will also announce two new smartwatches. The Galaxy Watch 4 will follow the two-year-old Watch Active 2. The Watch 4 Classic will be the successor to the Watch 3, launched last year. The latter will be fitted with a rotating bezel, which contributes to intuitive operation.

For the first time, both of Samsung’s new smartwatches will run on the Google Wear OS. Previously, the smartwatches ran on Samsung’s Tizen OS. Thanks to the new operating system, users will be able to take advantage of all the benefits that Google’s Wear OS has to offer.

Finally, Samsung is expected to present a new set of earbuds. These will of course also be used in combination with the new foldable phones and smartwatches. The Galaxy Buds 2 are less advanced than the Galaxy Buds Pro released at the beginning of this year. This will also result in a slightly lower sales price, nevertheless the earphones will be equipped with Active Noise Canceling technology.

Presumably, the new products will be available for pre-order immediately after the product presentation. The launch will take place on Friday 27 August. The expected prices, memory configurations and colors are as follows:

CityCoins launches cryptocurrency for the city of Miami: MiamiCoin

a new variant closely monitored by the WHO