Sonar Watch, your best ally for DeFi on Solana?

If you have been familiar with the Solana blockchain (SOL) for a while, it is very likely that you are already using several protocols from this ecosystem. How to track the exact state of your portfolio in such a context? This operation is often very time consuming if you don’t automate the aggregation of your portfolio information, but how do you do it?

It is in this context that Sonar Watch was born, a platform that provides a complete overview of the metrics of a portfolio or a public address of the Solana blockchain.

Via a dashboard that supports most of Solana’s protocols, Sonar Watch aggregates all the data relating to a portfolio: tokens held in the portfolio, tokens placed in staking, participation in yield farming, return on your participation in pools, etc. .

By connecting your wallet to Sonar Watch, you will have direct access to the functionalities of the platform. Let’s take a look at the different data analyzed by Sonar Watch.

First of all, Sonar Watch traces the evolution of the value of your portfolio over time, a statistic that many investors consider essential.

Below, you will find everything concerning your cryptocurrencies placed in liquidity pools, staking programs, yield farming, lending and borrowing solutions or even your open positions with levers.

For example, Sonar shows here the rewards waiting to be collected on Raydium, Orca and Cropper. The “Pending” tab is relatively practical for monitoring the results of your investment strategies in real time.

In addition to monitoring your investments in DeFi, you can from Sonar monitor all the non-fungible tokens attached to your wallet.

Sonar Watch aggregates all of your NFTs and estimates their overall cost based on the floor prices of the different collections. 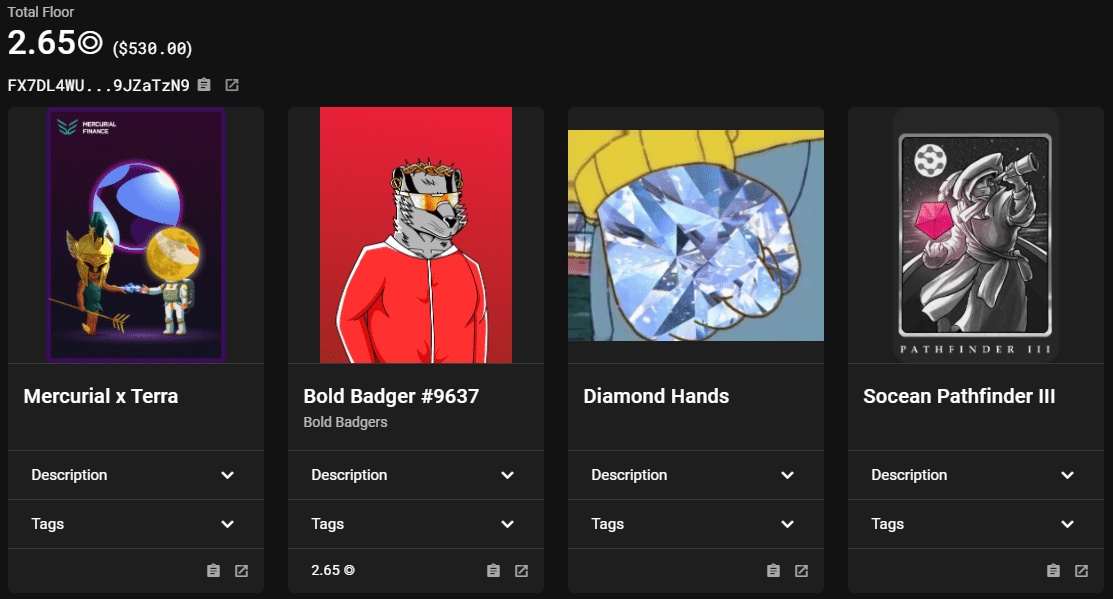 Another tool already available on Sonar Watch, you can create your own NFTs from the platform with a few clicks.

To do this, simply go to the “NFT Creator”, connect your wallet to it, download the image associated with your NFT and then give it a name and other parameters if you wish.

Before clicking on “Create”, note that small fees apply for the creation of your NFT. 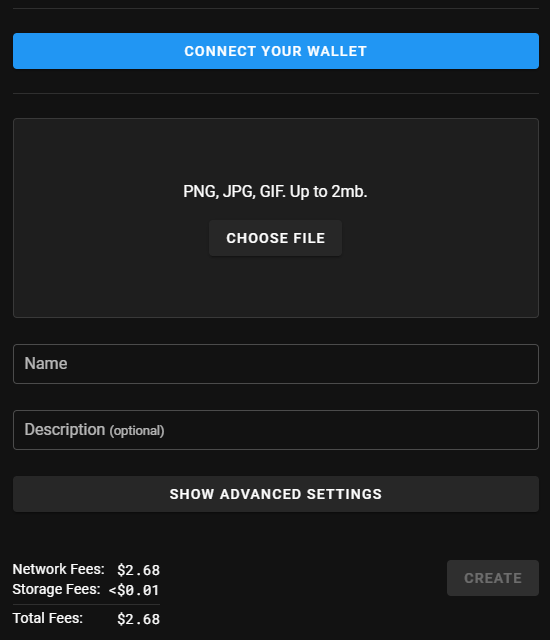 What are the roles of the SONAR token?

The Sonar Watch platform is powered by its own token, SONAR. This token issued on the Solana blockchain, considered a utility token, is at the very heart of Sonar tools.

Sonar users who have a sufficient amount of SONAR will be able to claim “Pro” status on the platform. The Pro status will open the door to many features: personalized charts, aggregation of data from several portfolios, direct integration with protocols, automatic data refresh, advanced impermanent loss calculator, etc.

As new features are developed, the team plans to unlock new use cases for the SONAR token.

How to participate in the presales of the SONAR token?

The Initial DEX Offering on Solanium

The first possible option to obtain SONAR tokens before its arrival on the markets, you can participate in its Initial DEX Offering (IDO) taking place on the Solanium platform.

The unit cost of a SONAR token through this IDO is 0.20 USDC, and Sonar Watch will raise a maximum of 500,000 USDC through the platform, which corresponds to a total allocation of 2.5 million SONAR tokens.

When choosing this option, there are a number of steps you must follow to have a chance to get a SONAR Token Allocation.

First, familiarize yourself with the Phantom Wallet, which is often recommended for interacting with Solana blockchain applications. You must then feed it with a few SOLs in order to pay various fees necessary for your interactions with the protocols. Even if the fees are minimal, have at least 0.25 SOL reserve in your wallet.

To increase your chances of getting a winning ticket, you need to stack SLIM, the Solanium tokens. Depending on the quantity of SLIM tokens you hold and the period during which they will be locked, the number of tickets that will be allocated to you will be more or less important. Details regarding SLIM token staking can be found on this page.

From November 16 to 19 – The white list: go to this page and click on “Connect Wallet” then on “Register for Whitelist” to subscribe to the IDO whitelist. You will then be able to participate in the lottery which will take place on November 19; November 19 – The Lottery: check the IDO page to see if you have received any winning tickets; November 19, 2 hours after the lottery – Revelation of the winners: Solanium will announce the wallets that will be able to participate in the sale of SONAR tokens; November 22 – Distribution of SONAR: SONAR tokens will be delivered to participants’ wallets.

In addition to the IDO on Solanium, you can also acquire SONAR via the centralized Gate.io and MEXC platforms.

From November 19, Gate.io users will be able to participate in the presale of the SONAR token. In total, Gate.io will distribute 1 million SONAR, at a unit price of 0.20 USDC. All the details about this IEO are available on this page.

The MEXC Global platform also lists the SONAR token in its M-Day program, giving users the option of obtaining SONAR tokens at C $ 0.20.

Between November 17 and 21, several snapshots of MX tokens held by users of the platform will be taken.

Participants who register for the M-Day dedicated to Sonar Watch during this period participate in a raffle, with the possibility of winning a ticket that will allow them to purchase the newly listed tokens at a reduced price.

In total, 1.5 million SONAR tokens will be distributed by MEXC. All the information about this sale can be found on this page.

Like Zapper for the Ethereum blockchain, Sonar Watch could become a staple in the Solana blockchain ecosystem.

The objective of the platform being to simplify the user experience thanks to the aggregation of all the statistics of his portfolio, Sonar Watch is relatively useful for monitoring the progress of its various strategies.

As the Solana blockchain evolves very quickly, Sonar Watch will continuously support new protocols. The team also ensures that the scalability of features is essential to continue to meet the needs of its users.

Regarding the SONAR token, it should become more and more important within Sonar Watch over time. The “Pro” status should quickly expand with new options, which will only be accessible to those with a certain amount of SONAR.

👉 To find out more, check out Sonar Watch’s documentation and find all of its social networks below: