Russian miners soon forced to pay more for their electricity?

This is the possibility that Nikolai Shulginov, the Minister of Energy, raised during the Russian Energy Week which recently ended. He believes that Bitcoin (BTC) and cryptocurrency miners in general should not be able to take advantage of competitive prices for their business, and leave the cheapest electricity to other consumers in Russia.

According to Shulginov, miners could have a huge influence on the power grid:

“We cannot allow minors to exploit the situation and make it worse, to the detriment of the reduced tariffs offered to the population. Otherwise, the volume of subsidies would have to be increased, which is unacceptable. “

The miners would increase the load on the electricity network, and the risk of accidents in power plants according to an official from the Fuel and Energy Complex. In Siberia, in the region of Irkutsk Oblast, electricity consumption would have exploded this year by + 160%. We note that this region is close to China, which has precisely banned cryptocurrency mining recently.

👉 To read on this subject – Edward Snowden: “Bitcoin (BTC) is stronger after the ban on cryptocurrencies in China”

Russia therefore plans to increase the bill for cryptocurrency miners, in order to favor the population rather than this industry. This possible measure does not happen by chance. Since China hunted minors this summer, they have been exported to other countries, including Russia.

According to the latest data available to us, Russia is among the territories that have benefited the most from the Chinese exodus: 11% of the global Bitcoin hashrate came from the country last August. It is now the third most important territory for mining, after the United States and Kazakhstan: 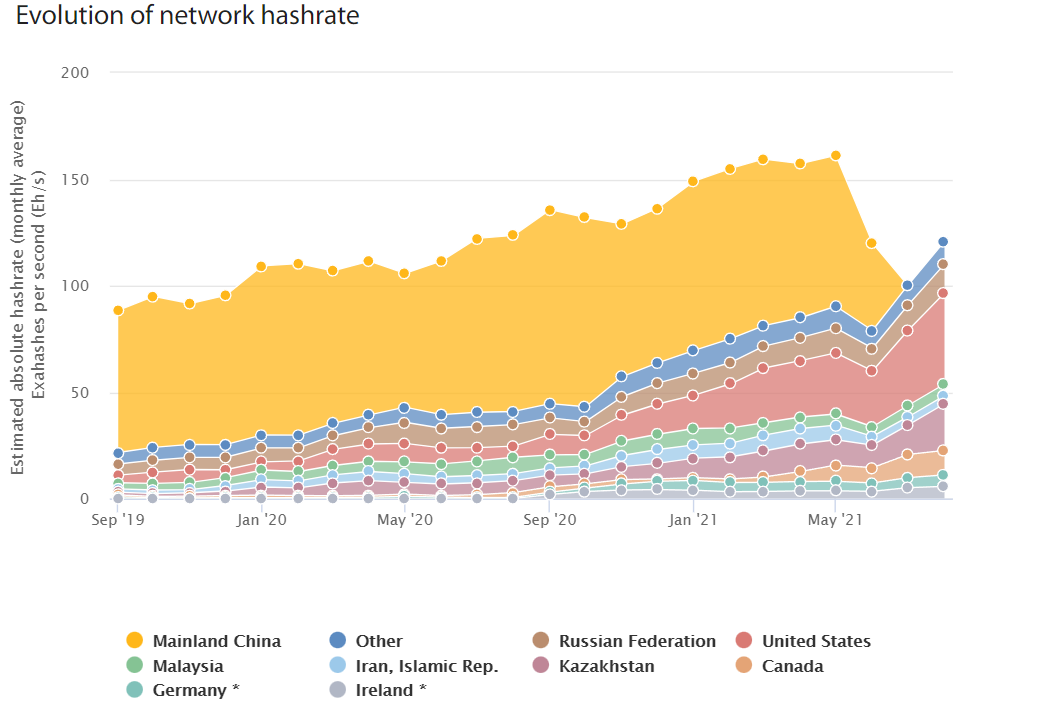 Evolution of the Bitcoin hashrate by country. Source: CBECI.org

👉 To learn more – Bitcoin (BTC): the majority of the hashrate now comes from the United States

In any case, it is a global trend that we are witnessing at the moment. Governments and regulators have turned their eyes to the mining industry, and attitudes vary from region to region. In China and Russia, we will therefore tend to want to slow down the miners.

But in other countries, we rely more on mining. The most “crypto-friendly” of them, El Salvador, has thus started mining Bitcoin with the energy of the country’s volcanoes.

In the United States, the attitude is less maximalist, but ideas are emerging: a few days ago Senator Ted Cruz estimated that the energy resources of Texas could represent an opportunity for Bitcoin. It should also be noted that Belarusian President Alexander Lukashenko in September encouraged the inhabitants of the country to mine cryptocurrency.

The mining sector therefore sails as usual between a certain covetousness and mistrust on the part of politicians. Is Russian severity the right choice? The future will tell.

Qonto bank now allows its clients to invest in cryptocurrencies

Kraken delists Monero (XMR) from its British platform, to comply with regulations