This article is written in partnership with DEIP (find out more)

DEIP, when the blockchain is at the service of creators

Launched in 2018, the DEIP project quickly became the world’s first Web 3.0 protocol for the tokenization of high-value intangible assets. This decentralized blockchain-based infrastructure is reinventing the economy of creators and innovation.

The platform provides creators with easy access to Web 3.0 applications and tools. It also allows users to develop their application on it.

This is the boost that this industry needed, which was already generating $ 2.2 trillion in profit with 30 million jobs as of 2010. The use of blockchain breaks the various constraints of the sector which are based on rules and mechanisms of the global economy, and which slow its progress.

According to a Deloitte report published in June 2021, this industry could become one of the main engines of the global economy within 10 years, with a potential growth of 40%.

The DEIP project comes from a start-up founded in 2015: Collective Intelligence Labs. This group of architects, researchers, designers and developers specializing in blockchain aims to “help realize the potential of humanity” using collective intelligence technologies.

The use of blockchain mechanisms

In order to ensure the integrity of intangible creations, DEIP allows the creation of non-fungible tokens (NFTs). The concept of NFTs is relevant here, since each creation is unique, like each NFTs. This therefore allows users to authenticate and protect their creations.

Where the protocol stands out is that it also allows these non-fungible tokens to be split. This gives “Fractionalized Non Fungible Token” (F-NFT). These token fractions, which can then be distributed to different individuals, are a combination of NFTs and ERC-20 tokens.

Example of using an F-NFT

The price of these F-NFTs is defined when one of its fragments is sold. Thus, the sale price of the latter then defines that of the whole asset.

Decentralized finance mechanisms (DeFi) are also present on the platform. In order to facilitate the financing of the creators, they can obtain a loan. For this, the borrower must lock an F-NFT which will act as collateral, which will allow him in exchange to receive dX stablecoins. Once the loan is repaid, the F-NFT is returned to its owner. 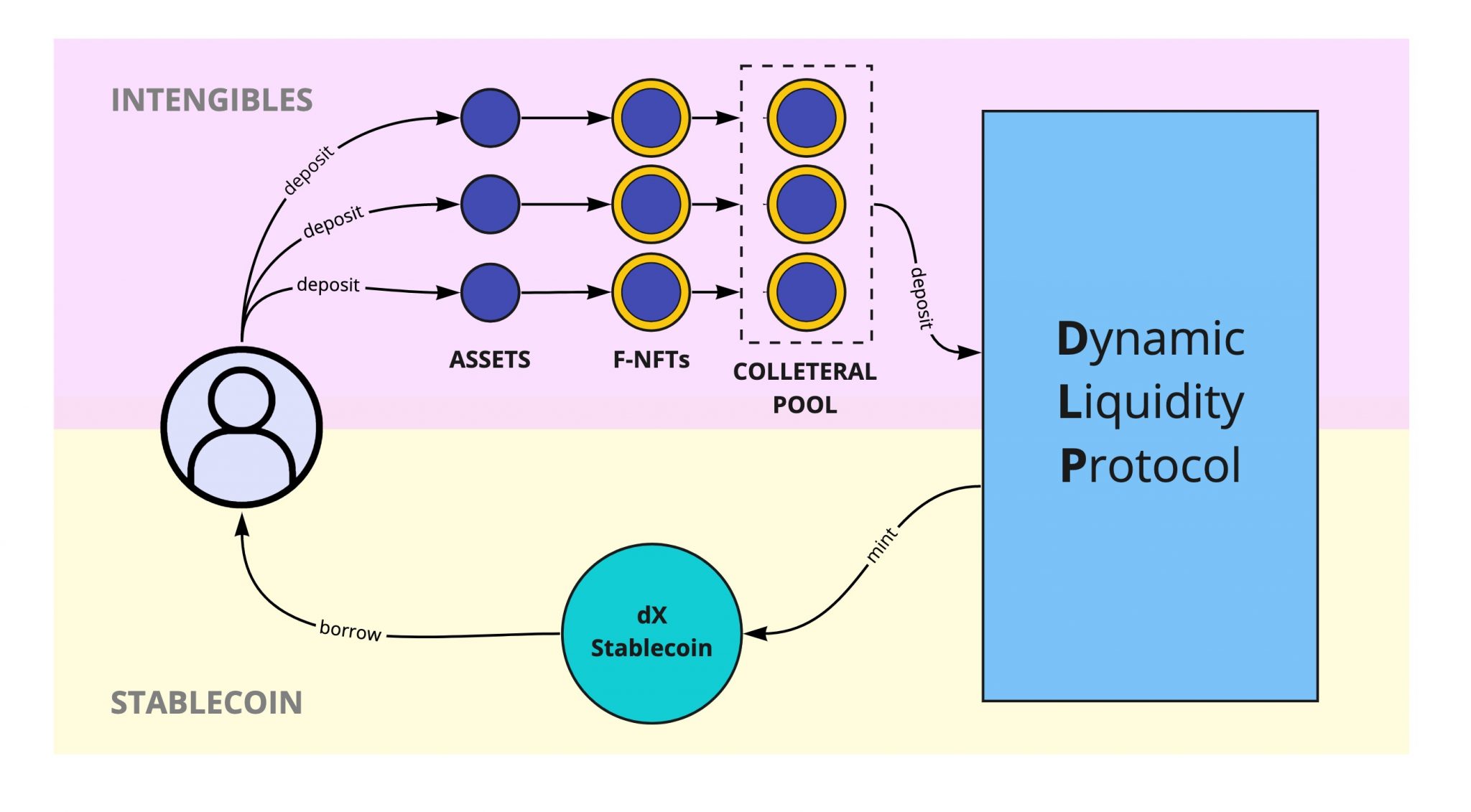 How the loan works

👉 Discover our complete presentation of the DEIP project

The presale of the DEIP token

The DEIP platform launched the pre-sale of its eponymous token on October 28, 2021, until November 30 of the same year. Due to a DEIP limit set at 4 billion units, this presale gives access to 2% of the tokens, or 80 million units.

If you feel like participating in this presale, you must meet the following conditions:

First, you have to fill in a “whitelist” form available on the protocol site; Then you must present a proof of identity (KYC) so that it can be verified; Then, sign the Future Token Sale Agreement (SAFT), an investment contract that promises tokens delivery at a later date; Finally, you can make a transfer in USDC or USDT.

This presale is the opportunity for investors to acquire the DEIP token before the public release of the project. Despite this, if you want to get tokens after the presale closing date, an Initial Dex Offering (IDO) will take place in December to allow the business to take community feedback into account.

What are the roles of the DEIP token?

Since DEIP is a protocol using blockchain technology, it is no wonder that its token is at the center of the project. Indeed, it has 3 essential roles for the platform.

Its first role is utilitarian. Since network transactions generate fees, one of the roles of DEIP is therefore to allow users to use it as a means of payment on the platform.

Its second role is governance. The decentralization of the protocol means that it is not governed by a single entity, but by independent individuals. Its governance is managed by a board which begins with 12 members and will reach 30 members in 6 years, ie an addition of 3 seats per year. Seats are allocated during an annual staking competition, i.e. a competition between users who have locked their DEIP tokens.

Staking is also the last role of the token, along with yield farming. Users can lock their tokens to earn an annuity from the transaction fees, but they also receive a portion of the profits from the investments made by the board.

The presale of the DEIP token announces its very imminent arrival in the blockchain horizon. The services of the platform as well as the utility of the token offer DEIP all the tools to become a pillar of the new economy of creators.

👉 Join the French-speaking community of the DEIP project on Telegram

About the Author: Kamil Witoslawski

As a student of economics, cryptocurrency and blockchain caught my attention a few years ago, and today I am intrigued by their stakes on the economy and society.
All articles by Kamil Witoslawski.

establishment of a health pass for non-European tourists