How do blockchains initially distribute tokens?

The data was shared by analyst Ryan Watkins of Messari, on Twitter. As he points out, the war of smart contracts and “Ethereum killers” has started, and the models are particularly varied.

One element to consider is the initial distribution of tokens, which gives an indication of the primary ambition of a blockchain project. Most offered a large share through a public sale, but the shares allocated to the community or teams vary: 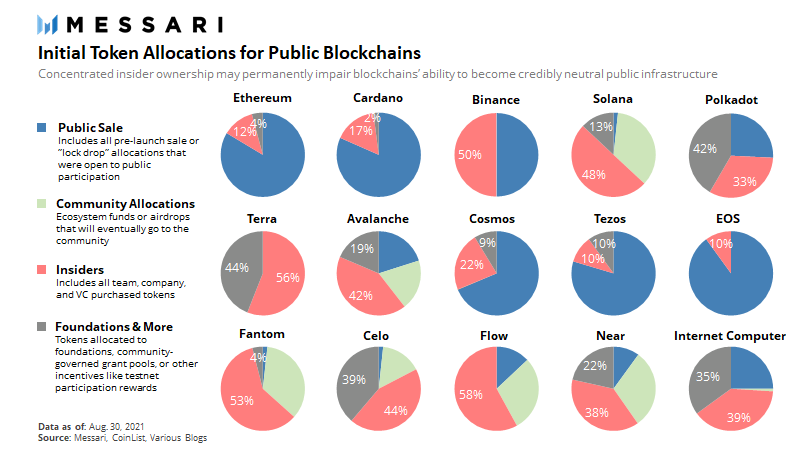 As can be seen, the blockchains that originally distributed the most tokens are Tezos (XTZ), Eos (EOS), Ethereum (ETH) and Cardano (ADA). Conversely, some projects have allocated a large part of their tokens for “Insiders”, ie the team, the company, and the venture capital funds.

In this category, Fantom (FTM) has the most tokens preserved, with a very small public sale. This is also the case for Flow (FLOW), Terra (LUNA) and Solana (SOL).

👉 Find all our cryptocurrency presentation sheets

As the analysis points out, if a significant portion of the tokens are kept by “Insiders”, this can “reduce the ability of a blockchain to become a public infrastructure that would be credibly neutral”. The accumulation of tokens by the team can on the one hand give it significant voting power, but also potentially influence the price of an asset.

This is of course not necessarily the case: at Polkadot, one could argue that the 33% of tokens kept by the team are offset by the 42% of tokens reserved for the foundation and the 25% that were distributed by a public sale.

Conversely, Eos chose to distribute a large part of its tokens, but that did not prevent the project from being repeatedly accused of a great centralization. The initial distribution is therefore only one indicator among others.

Last point to emphasize: the oldest cryptocurrencies offered significant public sales, since they were from Initial Coin Offerings (ICO). The cryptocurrency ecosystem has turned away from this type of funding in recent years, which also partially explains why younger blockchains have smaller shares.

👉 To go further – Decentralization and distribution of cryptocurrencies